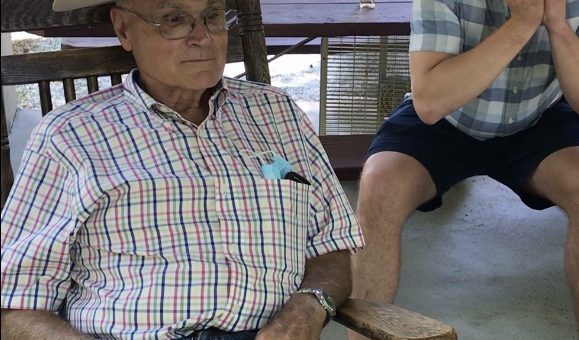 A reverse parade was held in their honor with two goals in mind: to thank Dr. George Sorrells for more than 55 years of service, and to help raise funds for a place both he and Barbara love.

Vehicles with well-wishers drove past both Dr. George Sorrells and his wife Barbara who sat under a gazebo.

Hot dogs, chips, and water were served to visitors and many had their picture taken with the stand-up impersonation of the well-respected physician.

Dr. George Sorrells was born on a farm in rural Orange County to two teachers; George W. and Evelyn Sorrells. He attended Orangeville and Huron schools as a child and graduated in 1955 from French Lick High School. He went on to attend Indiana University for his undergraduate work. He spent his summers working at Carpenter Body Works in Mitchell, which is where he met his wife, Barbara. They married on July 4, 1960, and will celebrate their 60 year anniversary this year. They have four children: Rhonda, George W. III, Ann and Trish. They also have 10 grandchildren.

Dr. Sorrells graduated from the Indiana University School Of Medicine with his medical degree in 1962. He was at Riley Hospital for Children in Indianapolis from 1963-1965 before moving to Bedford to join the Edgewood Clinic.

The Bedford Camp and Conference Center is located on Bedford’s southside next to the White River.

Barbara first started visiting the camp at the age of ten. The Sorrell’s continued the tradition with their children and grandchildren attending camp.

The goal is to raise around $350,000 for major renovations to the facilities.

There are more than 70 acres of land that can be utilized for various uses and events.

The lodge features a fully functional commercial kitchen, and a large fireplace.

There are cabins, a pool, and a recreation area. The ten cabins can each sleep up to twelve campers.

Those who enjoy bike riding, hiking, archery, kayaking, birdwatching, or making crafts can have a place to enjoy those or a combination of other activities.