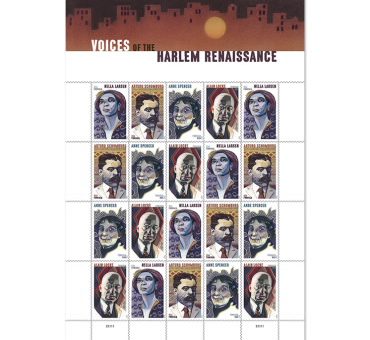 The stamps feature stylized pastel portraits of the four honorees, based on historic photographs. Each stamp incorporates African-inspired motifs as background elements. The design elements reflect the increased interest in African culture, history and aesthetics shown by the writers and artists of the Harlem Renaissance. The artist for these stamps was Gary Kelley, and art director Greg Breeding designed them.

Background on Voices of the Harlem Renaissance

After World War I, many highly creative African Americans flocked to the New York City neighborhood of Harlem, where the northward migration of African Americans looking for work, immigration from the Caribbean and the presence of important activist organizations had all helped to establish Harlem as a bustling center of black life. Caught up in a whirl of friendships and rivalries, a legendary social scene and an inspiring air of creative exchange, a dynamic community of African Americans brought forth an exceptional flourishing of literature, music, and the visual arts. By no means restricted to New York City, the creative energy that found its strongest expression in Harlem during the 1920s was also evident in Chicago; Washington, DC; and other communities where African Americans sought to articulate their experiences and give shape to their dreams.

New generations of African American artists and writers created work that reflected the changing times. Fostering some of the great American literary voices of the early 20th century, the Harlem Renaissance firmly established African Americans as a vital force in literature and the arts.

In two novels, Nella Larsen (1891-1964) explored the complex experiences of mixed-race people and questions of identity and belonging. Now considered one of the most important novelists of the Harlem Renaissance, Larsen challenged conventional thinking, and her work continues to invite interpretations from previously neglected points of view.

,
Writer, philosopher, educator, and arts advocate Alain Locke (1885-1954) was a vital intellectual figure of the Harlem Renaissance. Locke wrote and edited some of the most significant publications of the movement, and he played a leading role in supporting and promoting writers and artists.

Known for unconventional imagery that evokes nature, gardening, religion, and myth, poet Anne Spencer (1882-1975) provided a haven for African American writers and intellectuals in her Virginia garden and home, a reminder that the artistic and cultural life of the Harlem Renaissance extended far beyond New York City.

Customers may purchase Voices of the Harlem Renaissance stamps and other philatelic products through the Postal Store at usps.com/shop, by calling 800-STAMP24 (800-782-6724), by mail through USA Philateliccatalog or at Post Office locations nationwide. The stamps are being issued as Forever stamps and will always be equal in value to the current First-Class Mail 1-ounce price.