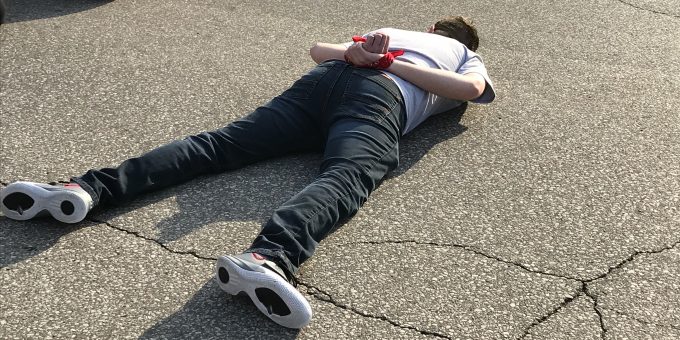 (BLOOMINGTON) – On Friday evening, protestors held signs, blocked city streets, and made their way from the Monroe County Courthouse to the Jail to protest the recent deaths of Breonna Taylor in Louisville, Kentucky and George Floyd in Minneapolis, Minnesota.

Breonna Taylor was shot by police officers in the early morning hours of March 13 as part of a narcotics investigation. Taylor was struck at least eight times, and according to police records was not the main target of the investigation. Her apartment, however, was named on the search warrant that led police to her apartment. The FBI is investigating the incident.

George Floyd died in police custody when a police officer used a knee on the back of Floyd’s neck for at least seven minutes. Floyd is heard on video begging officers for help because he could not breathe. This resulted in Floyd’s death and has sparked outrage across cities in the United States.

Bloomington protestors gathered at the east side of the Monroe County Courthouse around 6 p.m. Friday night. The protestors holding various signs that said “I Can’t Breathe” or “Black Lives Matter”.

“To be here now means a lot to me,” said Scott Gardner of Bloomington.

“I wanted to bring everyone together and demand action,” said Logan Collins of Bloomington. Collins was one of the organizers of Friday’s protest.

Collins called on the Mayor of Bloomington and Bloomington Police Department to bring about change such as Community Policing.

Around 6:30 p.m., the protestors blocked off the intersection of Kirkwood Avenue and Walnut Street. A white SUV and green truck tried to continue north onto Walnut which sparked a heated discussion between the driver and protestors. Eventually, the protestors let them through.

Protestors then walked from Walnut Street to the intersection of Kirkwood Avenue and College Avenue.

Things got a little intense between protestors and drivers as motorists tried to navigate the area. A black passenger vehicle and a gray truck attempted to drive south down College Avenue. Protestors yelled at the drivers to go around but the drivers continued to attempt to proceed south on College Avenue. The driver of the pick-up truck moved forward and struck one of the protestors. Protestors then started striking the truck with their hands.

The driver of the pickup truck then left the area, with police following the vehicle from College Avenue to Walnut Streets. The vehicle continued North onto Walnut Street with the police surrounding that vehicle. There is no word on any arrest of that driver.

Police officers then told the driver of the black passenger vehicle to leave the area and go another way. The driver left the intersection, traveling east on Kirkwood when she stopped in the middle of the street.

A brief exchange occurred between the driver and the Monroe County deputies, who told her to get back in her car and leave the area.

The crowd cheered the police as the vehicle was forced to find another way to go.

The protestors sat in the intersection as one of the protestors laid face down in the middle of College Avenue.

Many spectators watched from nearby restaurants and businesses surrounding the square as the protestors yelled obscenities about police officers and calling for the abolishment of a police force.

Around 7:30 p.m. protestors then marched north on College Avenue to the Monroe County Justice Building.

Monroe County Sheriff’s deputies and Indiana State Police Troopers set up a perimeter around the Jail to make sure no vandalism took place.

Approximately around 8:00 p.m. the protestors held a moment of silence for seven minutes, symbolizing the time that the police officer had his knee on Mr. Floyd.

After the seven minutes were over, the inmates from the Monroe County Jail could be heard pounding on the windows to let the protestors know they heard them.

The protestors then went back to the Monroe County Courthouse and left just after 8 p.m.

Protests occurred throughout the United States Friday night with many causing fires, vandalism, and some injuries.

Ahead of Friday evening protest Bloomington Police Chief Diekoff issued the following statement in regards to the Floyd case.

“The death of George Floyd is deeply disturbing and I want to express my sympathy to Mr. Floyd’s family and community. This tragedy was absolutely unnecessary. Law enforcement officers are trained to treat all people with dignity and respect. These officers’ actions are inconsistent with the training of our profession. The Bloomington Police Department works continuously to build trust and understanding between our agency and the community we serve. The actions of the officers in Minneapolis are a reminder of how quickly that trust can be destroyed. All law enforcement must do a better job of holding ourselves accountable and to the highest ethical standards. The Bloomington Police Department instituted the recommendations from President Obama’s Task Force on 21st Century Policing. Six years ago we were one of the first agencies in the State to institute body-worn cameras for our officers. Those cameras come on when an officer is interacting with a member of the public, providing transparency with each interaction. Constant training is conducted throughout our department on topics like de-escalation skills, implicit bias, crisis intervention, and mental health first aid. Officers receive 4 and a half times the State mandated training hours. Fourteen data sets are regularly released on the Cities B-Clear portal and to the Police Data Initiative as a means of transparency for the public to see what we do. Bloomington Police Officers work every day to serve and help our community. We hold ourselves to a high standard of professionalism and will continue to earn the trust of the people we serve.”

There were no damage reports to businesses or property during the protest on Friday in downtown Bloomington. Most protestors stayed on city streets and sidewalks.

Another protest is being organized for this Friday by the Indiana University Black Student Union.