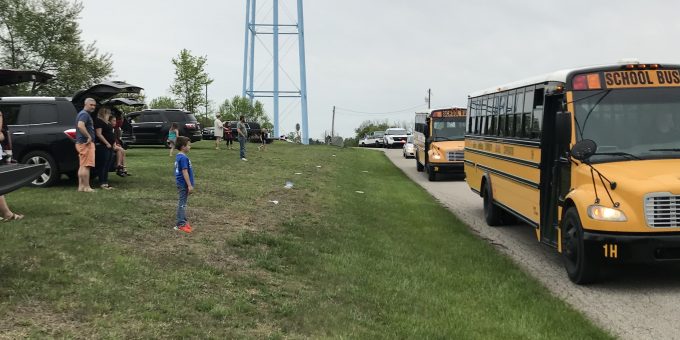 “We miss our kids so much, so we are excited to get out to visit all of our students,” Heltonville Elementary School Principal Connie McDaniel stated Monday night.

Around 6:00 p.m. the school buses departed the school to greet students waiting at the Heltonville Ball Field. The drivers then proceeded on to meet and greet students along the bus routes throughout Pleasant Run Township.

Many of the students were filled with excitement to see staff members since schools were closed due to the COVID-19 pandemic.

“Change is hard. Heltonville is a family. It is close-knit; I went through some old yearbooks and there were several who attended Heltonville over the years,” said Sandra Bartlett who has been a librarian at Heltonville for more than 33 years.

Kyle Bartlett chimed in saying, “They are taking away our community.”

First and Second Grade Teacher Crystal Fisher commented, “This is a sad day as they will be closing the school. But, we are excited about seeing most of our students next year at Shawswick.”

“We hate how the year ended for them this year, but they are going to go on and do great things at Shawswick next year,” said Heltonville Title I Aide Cheryl Littell.

While waiting for the staff to come by her house, Claudette Jackson, a 19-year business educator at North Lawrence Community Schools, reflected on being a teacher at Heltonville High School.

“I taught from 1968 until 1974 at Heltonville before the consolidation. This is very sad for the community. The first took our high school away. Then, the sixth graders, and now we are where we are at. This will have such a negative effect on our community,” Claudette Jackson concluded.

Around 7:30 p.m. the parade made its way past Diamond Road and headed into Heltonville where they were greeted by Tankston Smith and Tinsley Smith, who is a second-grader at Heltonville. Both were excited to see the teachers pass by.