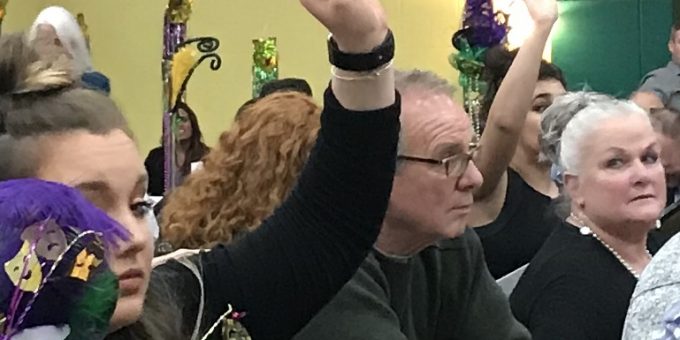 (BEDFORD ) – This will mark the eighth year for the Becky’s Place Mardi Gras Shelterbration which celebrated a record sell-out of tickets for this year’s fundraiser.

The fundraiser is the biggest fundraising event for Becky’s Place, a woman’s shelter on Bedford’s northside. The event was held this past Saturday at the Shamrock Center.

“This year’s Madi Gra was a sell-out with over 450 tickets sold for the event.” according to Father Rick Eldred of St. Vincent De Paul. “This is more than fundraising; it provides hope for the woman and children who stay at Becky’s Place.”

With those statistics, Father Rick Eldred states that every dollar and every bit of effort that is put forth which includes volunteers, donations, and gifts, helps women who have maybe lost hope in themselves.

“Becky’s Place helps them get jobs, gets them back on their feet and helps them get homes. We even help some of them get their children that have been removed from their custody,” Father Rick continued.

The evening was filled with food, fun, and entertainment as well as an auction.

Sister Becky Ryan shared her story. Years ago, she was married to an alcoholic and in an abusive relationship.

“Unless you have been there, you do not know what it is like,” she added.

Later on in life, Becky went on to start Ruthie’s Place, a women’s shelter, and Michael’s Haven, a men’s shelter in Bedford.

Cami Prichett gave out the Help Create Hope – Becky Award to three people this year. They included Louie Kovacs, who has donated for several years; Dr. Ray Snapp, who has offered dental services for women; and Karen Wade on behalf of the St. Vincent De Paul Society, which encompasses several individuals who work through that organization.

Dr. Kamal Girgis worked the floor for the auction which raised several thousands of dollars for the organization.

The evening concluded with live music provided by the Semple Band from Chicago, Illinois.