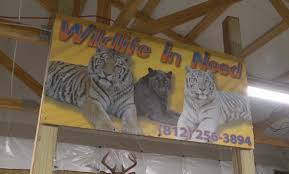 (CHARLESTOWN) — An Indiana judge issued an order allowing the state to inspect a wildlife center that it is seeking to close over alleged animal abuse.

Attorney General Curtis Hill filed the lawsuit and requested the injunction on Feb. 11 in an effort to shut down Wildlife in Need and move its animals to court-approved sanctuaries.

Tim Stark, who owns the center with Melisa Lane, said the ruling didn’t surprise him.

“Like I told them in court, I don’t have anything to hide,“ Stark said. He noted that he doesn’t agree with an ‘army’ coming to his facility because it will cause the animals to ‘freak out,’ which would go against the state’s main concern, which is the animals’ well being.

In the lawsuit, the state contends that Stark has a history of abusing and neglecting the animals, trafficking them from government authorities and attempting to relocate them out of state. Attorney General Hill says a welfare inspection is needed while the case is ongoing to determine if the animals are in danger.

The preliminary injunction allows the state to inspect the facility and its animals through photos and videos. The state’s veterinarians can also treat any animals found to be in distress or in need of medical attention.

The owners can’t move animals or corporate assets without approval, and they must continue caring for the animals and providing the state with records and information regarding the animals’ whereabouts, according to the injunction. They also must alert the court to any births, deaths or new acquisitions.

The lawsuit was filed after the U.S. Department of Agriculture revoked the center’s Animal Welfare Act license and ordered it to pay $340,000 in fines, including $40,000 that must be paid directly by Stark. He has appealed that decision.