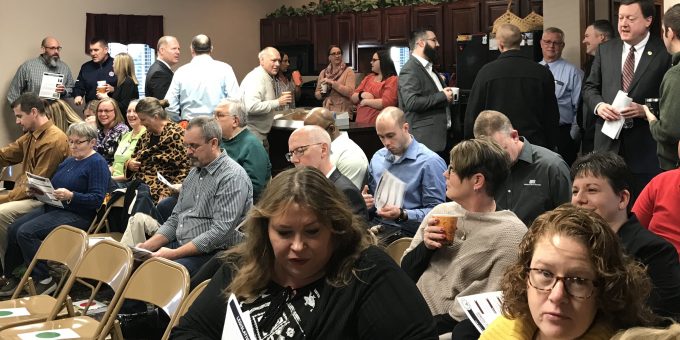 (BEDFORD) – The “Breakfast With the Legislators” was well attended Friday morning at the Bedford Chamber of Commerce. The Lawrence County Leadership class attened this morning’s legislative update.

Senator Eric Koch Republican District 44 and Chris May Indiana District 65 gave the group an update on this year’s legislative session.

This legislative session will end in about two weeks. Some bills have made their way to the governor’s desk. The health care bill had a difficult time being passed.

Senate Bill 197 would prohibit state agencies and local units of government from purchasing telecommunications equipment from companies designated as posing a national security threat to the integrity of communications networks or the communications supply chain by the Federal Communications Commission (FCC).

Currently, two companies, both based in China, Huawei Technologies and ZTE Corporation, are designated as a threat to national security. According to a recent Wall Street Journal report, these companies, specifically Huawei, have “backdoor” technology designed to covertly and secretly access mobile-phone networks. By having this access, these foreign communications companies are able to obtain sensitive and personal information without network providers, and users, knowing.

SB 197 would align Indiana with the federal government’s 2019 National Defense Authorization Act, which prohibits federal funds to be used on equipment or services from these companies.

Chris May’s bill on Rural Redevelopment in House Enrolled Act 1370 is also on the way to the governor’s desk.

A challenge facing rural areas is promoting economic development. The legislation would allow cities and counties in the proximity of each other to band together to enter into regional land banks to acquire tax-delinquent and blighted properties to restore them.

May says, along with promoting economic activity, this legislation could help create additional housing options in rural communities while removing hazardous buildings and stabilizing property values. Expanding the scope of these land banks from the county level to regional areas can help with the upfront costs of establishing them.

The current land banks are in Elkhart, Indianapolis, and Muncie Indiana and this will allow smaller communities where the capital is available to purchase these properties.

House Bill 1264 that May authored would require national criminal history background checks of all employees and volunteers at child care facilities.

Under current law, only those in direct contact with children at child care facilities are vetted. His legislation would ensure all employees and volunteers of child care centers and homes undergo a criminal history background check.

“Our children are our most vulnerable,” May said. “This legislation would eliminate a loophole that allows some who work in proximity of adolescents to bypass an important check if they’ve ever been convicted of a crime. It’s imperative we do everything we can to ensure the safety of children.”

House Bill 1147 which May co-authored this bill allows small towns to have their elections on even years. This would benefit towns like Oolitic, who has to pay for the town elections. This legislation will only affect towns with a population of less than 3,500. The decision to move the election will be up to the town council.

House Bill 1080 will require insurance companies to pay for colonoscopies at the age of 45. This law will mandate coverage for colorectal cancer testing under accident and sickness insurance policies, health maintenance organization contracts and state employee health plans to change the minimum age at which coverage must be provided from 50 years of age to 45 years of age.

May’s wife Amanda faced colon cancer and is a survivor. Today May revealed another friend who is 40 was just recently diagnosed. This legislation is on the way to the governor’s desk.

After the update on current legislation, the public addressed the legislators on local issues and legislation moving through.