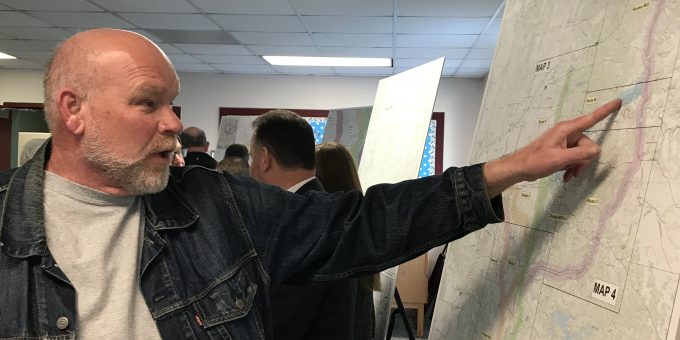 Several residents, business representatives, and local officials attended the meeting seeking information, details and giving their feedback on the 12 county area project that seeks to bring a connection from the Ohio River up to Interstate 69.

The Mid- States Project examines the concept of an improved highway connection in southern Indiana. The connection would begin on State Road 66 near the Natcher Bridge and cross the Ohio River at Rockport. It would then continue through the Huntingburg and Jasper area and extend north to connect to Interstate 69.

During the screening process, the project team started working in the summer of 2019 with dozens of potential preliminary alternative routes developed from a review of previous studies, agency feedback, and public input.

Alternative routes that didn’t satisfy the purpose and need of the project or routes that had major impacts on key resources were discarded.

Impacts to both natural resources and the community were considered including:

Performance of each preliminary alternatives was evaluated against the core goals of the project. including:

The Draft Environmental Impact Statement (DEIS) is expected to be published this fall and will identify a preferred corridor. A Record of Decision (ROD) is expected in the summer of 2021. After a Tier 1 ROD, more detailed Tier 2 environmental studies will determine specific alignments and preferred alternatives within the selected Tier 1 corridor.

Around 500 people attended the Monday evening meeting in Loogootee.

Local officials are hoping for a northeast route which will run through Bedford and Mitchell.

“Of course the City of Bedford would benefit if it would come up from the south through Mitchell,” said Bedford Mayor Sam Craig. “This will give people great access to I -69 and access to our city.”

“I would think the O Plan would serve Lawrence County the best coming up through French Lick, Mitchell, Bedford and on to Interstate 69. This project will be huge for our local economy,” Mayor J.D. England concluded.

Some residents attending the meeting were concerned over the route and how it would impact their properties should the project move forward. But, most commented on how beneficial this would be for Lawrence County and how it could open up better economic opportunities to the area.

Thursday’s meeting will be at Jasper Middle School at 3600 North Portersville Road. The meeting will take place from 5:30 p.m. to 7 p.m. with a 6 p.m. presentation.

The project office is opened from 8 a.m. until 5 p.m. Monday, Wednesday, and Friday and by appointment at Vincennes University Jasper Campus Administration Building Room 216 or by calling 812-482-3116.

If you can not attend the meeting you can still provide feedback and review materials by going to https://midstatescorridor.com/