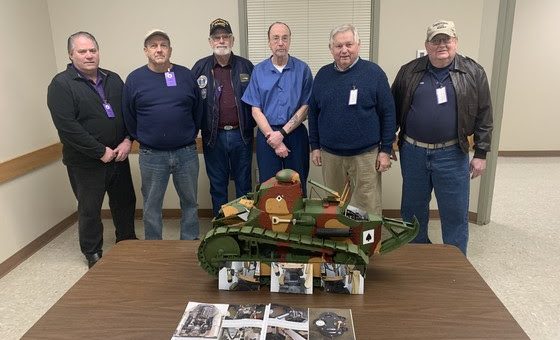 (CARLISLE) – After months of hard work and patience, the creation of a replica 1917 World War One 5-Ton Tank has been completed. Wabash Valley Correctional Facility offender Larry James has logged over 17,000 hours working on his project and was able to finally present it to the Vincennes Indiana Military Museum.

Features of the tank include a functioning turret and attention to detail on mechanicals, electrical, and colors. Offender James was able to complete this project using materials regularly available to him, along with approved donations, and funds from his personal account. Items used to create the replica included cardboard, approved wire, card stock, Q-Tips, and material from photo album books.

When asked how he was able to create such a detailed model Offender James commented, “I used the spiral of a photo album to create the springs and I used a broken headphone to make the wiring. I tried to be as realistic as possible.”

Judge Jim Osborne stated the following, “We have been thoroughly amazed at the detail and accuracy that he has been able to mold into his models. The ones that he has built so far are going to be assets for our growing exhibits. They represent and supplement existing displays that we have. We are excited that he is willing to do more for us.”

Judge Jim Osborne also presented offender James a special coin in appreciation of his efforts in building this for the museum. “This coin was made after we donated our tank and I would like for you to have a coin for yourself,” stated Judge Osborne.