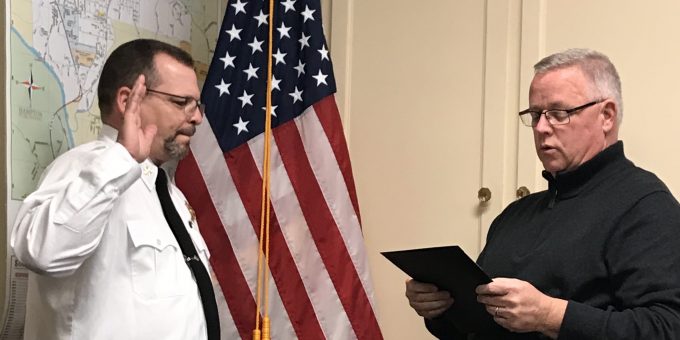 “It’s a responsibility that I will not take lightly; it’s a huge responsibility. I have some big shoes to fill. It takes a team; there are two other Battalion Chiefs and 34 firemen and we will all work together.”

Several family members, well-wishers, and other city employees attended the swearing-in ceremony. This included Hughes’ wife Mia and daughter Morgan. His other children were out of state and unable to attend today’s ceremony.

“I just want to thank my family. My daughter Morgan and lovely wife Mia and Lisa and Allen Webb, Tracy and John Williams thanks for coming,” Hughes commented. Hughes said former Mayor John Williams was in this same office 29 years ago and swore him in when he became a firefighter. “So, thank you!” said Hughes. “You’re welcome,” Williams replied.

DeWayne Turpen served as Bedford Fire Chief for the last nine months and oversaw the purchase of gas detectors for the department.

“It was honor and privilege to serve the residents of Bedford as their fire Chief,” Turpen said.