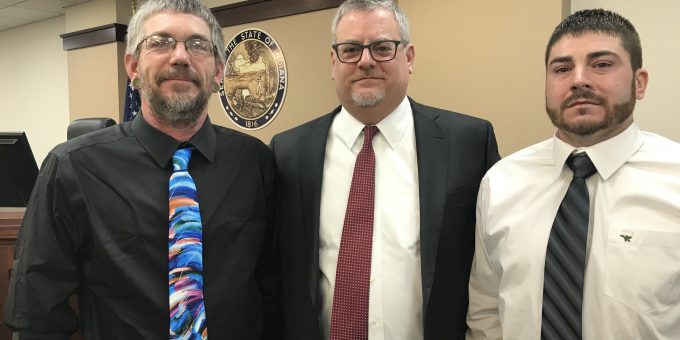 (BEDFORD) – There are only two problem-solving courts in the State of Indiana for those who are charged with domestic violence.

The problem-solving court for Lawrence County was started several years ago by Judge Michael Robbins.

On Tuesday, two graduated the problem-solving court, testifying to the fact that this program works. The program has helped these two individuals become productive citizens and it has laid the groundwork for re-establishing relationships that were once strained due to their behavior and actions.

Tyler A. Richison and Rickey D. Wessel Jr. graduated from the Problem Solving Court, with family, friends and several community leaders there to congratulate them on their accomplishments.

Both graduates remarked on how drug abuse caused great difficulties in their lives. Richison reflected on being unemployed and having a 12-year addiction to opioids. Richison said he couldn’t follow simple rules. While shedding tears, he described the stress he caused his family.

After completing the three-phase program in problem-solving court, attending NA meetings and becoming a sponsor himself, his life has changed for the better.

“My past I cannot change, or the things I have done. But now I am not the person I used to be,” Richison concluded.

Ricky D. Wessel Jr. thanked everyone for attending and commented on how his life has changed over the last three years.

Wessel said he was not honest with himself or his family. He was not open-minded that this program could work for him, nor was he willing to change. His only desire at first was seeing if this program would keep him out of jail.

However, when he began the program his life changed. He worked through the three phases of the program and is now employed and able to support his family.

Wessel concluded with thanking his family and support team for allowing him to successfully complete the program.

Judge John Plummer thanked the prosecutor’s office for their work in supporting the program.

“Without the Prosecutor’s Office, there would be no problem-solving court,” he added.

The program has many layers of people involved including individuals from the Lawrence County Sheriff’s Department, counselors from Centerstone and court staff. According to Judge Plummer, they all play a role in making this successful.