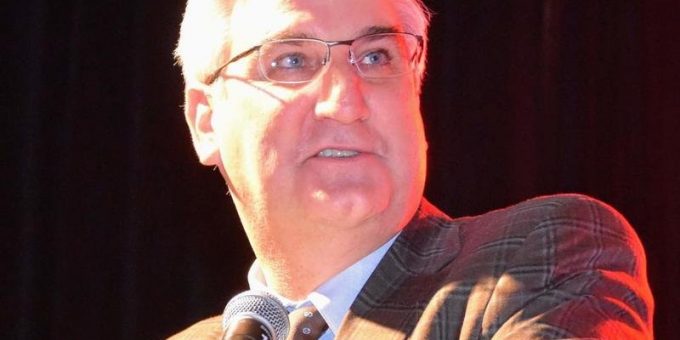 (FRENCH LICK) — As the representatives from each of the state’s 92 counties walked across the Indiana Farm Bureau convention stage to place an item in a time capsule that won’t be opened again for 50 years, Gov. Eric Holcomb shook their hand.

The time capsule will be opened in 2069. It was filled with photographs, newspaper clippings, and other memorabilia.

Holcomb left early from an event in Indianapolis for his 2020 re-election campaign attended by Vice President Mike Pence, his predecessor as governor, to participate in the INFB State Convention in French Lick.

“Agriculture is so symbolic to our state’s success story. It’s one in the same. Farmers in Indiana, obviously, were the original innovators, and we’ve continued to innovate,” he said, touting Indiana as the home of the National FFA Center and Headquarters and the National FFA Convention and Expo and its nearly 70,000 attendees, as well as Purdue University and AgriNovus.

With 94,000 farmers and 83% of its terrain still farms or forests and the majority of those farms, more than 90%, still family-owned, Indiana is “leaning in” and leading agriculture — not just in the United States, but across the globe, Holcomb said.

“It’s a real source of pride,” he said. “I get to brag about that around the world.”

Holcomb recalled bonding with the prime minister of India, Narendra Modi, over agriculture and sports.

“Those discussions are going to bode very well for the state of Indiana as the coming years unfold. He talked about partnering with us. He knew all about FFA. He knew all about our 4-H program and what they need to do to start grooming their young,” Holcomb said. “That’s 1.4 billion people today. It’s a lot more tomorrow. They are growing exponentially.

“He said, ‘We’ve got to make sure that we have the right wellness programs, the right nutrition programs, feeding programs, agriculture, farming programs — we need your expertise.’ So, that’s an exciting potential and development that we’re going to want to continue to birddog.”

Holcomb announced that Indiana State Department of Agriculture Director Bruce Kettler will officially join his cabinet at the start of next year, elevating the position to sit beside him and Lt. Gov. Suzanne Crouch.

“I don’t know of any other state that can say that,” he said. “We feel like we are just getting our momentum.”

Holcomb said INFB’s policy priorities, set during a delegate session in August, and his own legislative agenda, announced a week ago in Terre Haute, are aligned.

The governor thanked INFB for its strong support of investment and partnerships at the local level throughout the state to provide more affordable high-speed broadband internet.

“This is a big deal for our state,” Holcomb said, eliciting applause as he detailed the first dispersion from the state’s $100 million “Next Level Broadband” expansion program.

“I also want to say thank you for everything that you do to help us — and this is another area where we’re aligned — to attack the, let’s say, exorbitant, sometimes out-of-control healthcare costs. We’re going to hit this square on come January,” at the start of the new legislative session, he said, garnering more applause.

“You’ve got incredible, trusted, earned voices in the state of Indiana — and we’re going to need you come this short session,” he said. “It’s going to take all of you.”