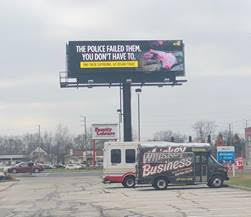 (INDIANAPOLIS) – Because Indiana State Police investigators refused to help mother pigs and their babies suffering at East Fork Farms in Brownstown where PETA says whistleblower footage revealed death, filth, and crowding, among other horrors – PETA has placed a billboard on Pendleton Pike as well as an ad in tomorrow’s print edition of the Indianapolis Star urging the public to help by leaving all animals off their plates and go vegan.

The video released by PETA shows that piglets whose others couldn’t reach them because they were trapped in gestation and farrowing crates died, and babies were left to die slowly next to their surviving siblings.

PETA says a worker cut off piglets’ tails without any pain relief and then threw the animals through the air.

PETA says the state police have refused to hand over records of its “investigation” of the farm.

Meanwhile, both the Indiana Department of Environmental Management (IDEM) and the Indiana Occupational Safety and Health Administration have provided PETA with records of actions that they took following the group’s complaints. The IDEM cited East Fork Farms for several violations, including excessive feces in the manure lagoon.

“PETA’s billboard and new ad show just a few of the piglets who were left to suffer and die on the filthy floor at East Fork Farms,” says PETA Senior Vice President of Cruelty Investigations Daphna Nachminovitch. “We hope people watch the video and decide whether they want to contribute to the suffering and death of pigs like these, who were let down by an agency that they depended on for a modicum of protection.”

PETA – whose motto reads, in part, that “animals are not ours to eat” – opposes speciesism, which is a human-supremacist worldview.