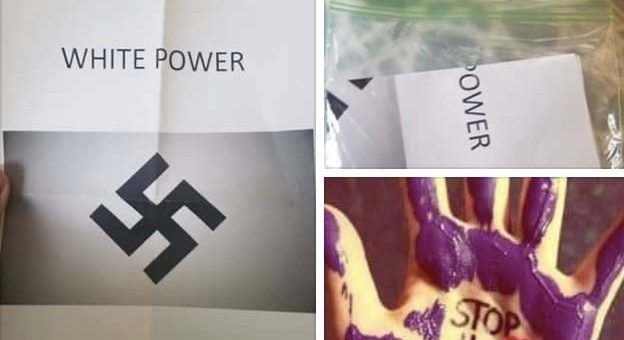 (BEDFORD) – The Bedford Police Department is investigating hate letters left on the ground on the city’s north side.

“My grandson found the letter Wednesday evening and handed it to me. I was not sure what to think about it at first. But, decided I should go ahead and notify the police,” said the resident in the 400 block of S Street. Concerned over their safety the resident wishes not to be identified.

“One of our neighbors has a biracial son, and they are very concerned about the letters being left in the neighborhood,” they added.

Bedford Police Chief Terry Moore states the department has received three reports at this time about similar letters of a swastika symbol requesting they visit a website or blog.

“We do not have any suspects at this time,” Chief Moore added.

“This is the first time this has occurred in our neighborhood and it is troubling,” says Shade Gann.

“We found a rock in one of the letters and asking in the letter that we go to websites that we are not familiar with,” stated Presley Neal. Neal found the letter by a vehicle parked in her drive. “We are very concerned at this time, and want to know why this has happened.”

“We are taking this very seriously and will continue to investigate the incidents,” added Chief Moore.

Anyone with information is asked to call the Bedford Police Department at 812-275-3311.