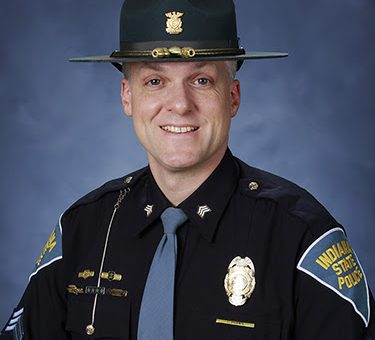 (BLOOMINGTON) – Sergeant Curt Durnil was recently recognized in a ceremony in Indianapolis for achieving 25 years of service with the Indiana State Police.

Durnil graduated from the 51st ISP Recruit School on December 4th, 1994. For reaching this milestone, he received an award from Indiana State Police Superintendent Douglas G. Carter that consisted of a framed certificate and a longevity pin to be worn on the uniform.

Sgt. Durnil also served at the Monroe County Prosecutor’s Office from 1991-1994 in various positions including Director of the Check Deception Division.

Upon his graduation from the ISP Academy, Durnil was assigned to the Connersville Post where he served as a road trooper until ultimately transferring to the Bloomington Post in 1997. Sgt. Durnil was then promoted to his current position as Public Information Officer in 2007 where he is primarily responsible for coordinating and facilitating department public education and information programs.

Durnil can be heard mornings and afternoons on local Bloomington radio stations with updates on area traffic and construction.

Sgt. Durnil is the son of ISP Captain Jimmie Durnil (Ret) and the brother of Master Trooper Todd Durnil, who also serves the Bloomington District. Durnil, his wife Lori and their seven children reside in rural Monroe County.