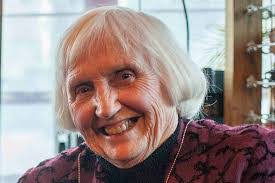 The dedication ceremony will take place after the inauguration of four new and five returning Bloomington Common Council members, the City Clerk, and Mayor Hamilton.  All events are open to the public.

Tomilea the former Mayor of Bloomington from 1983-1995, was the first woman elected to the office.  During her tenure, Bloomington’s historic downtown saw a period of revitalization, including the transformation of the former Showers Brothers Furniture factory into City Hall.

The naming of a frequently used conference room for Mayor Allison follows a well-established tradition: Mayors McCloskey, Hooker, Dunlap, and Lemon, among others, have been similarly honored with eponymous rooms at City Hall.