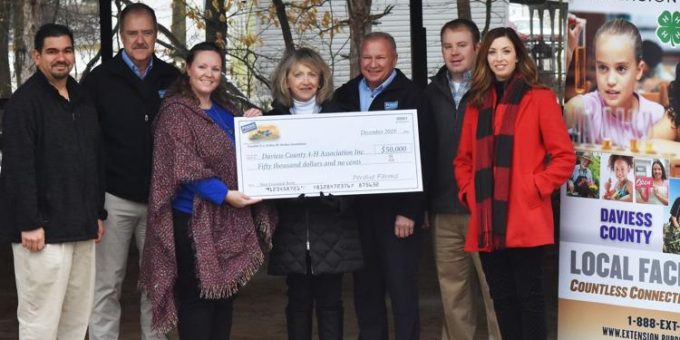 (DAVIESS CO.) – Perdue Farms, through the Franklin P. and Arthur W. Perdue Foundation, was awarded a $50,000 grant for the expansion of 4-H buildings used for youth development in Daviess County.

Another $50,000 was donated by Daviess County Farm Bureau.

Phil Flint with Daviess County Farm Bureau says, “We want to see 4-H continue to grow in the county, and it is growing, and be part of it. Expand the facility so that the next generation has something to do.”

All donations will help complete a three-phase project that will renovate the 4-H grounds.

Phase 1 is completed with the building of a mega barn. The big expansion has a food court in the arena and a new multispecies animal barn. The building houses house cattle, sheep, and goats. Plans added 18-feet to the east side and 60-feet to the south. A 30-foot extension was built off the current arena and is a food court. The old food stand was demolished. demolished.

The plan includes adding a multi-use barn to house chicken, rabbits and exhibit other livestock. The barn will be named for the Perdue Foundation and include a show arena, which could be used to help meet the needs of the rapidly growing Dog Club.

The current exhibit hall will also see an expansion. Plans for a 24-foot by 108-foot addition are in the works. The extra space would move the Mini 4-H projects into the same building as the other 4-H projects.

Parking areas would be created on the north end of the 4-H grounds as well as in what is currently the grassy area situated in front of the swine barn and on the south side of the horse arena.

Retention ponds, upgrades to the swine building and some other improvements are also on the master plan.

The overall project will be completed in around five years.

“The support of Perdue, a national leader in agriculture, shows a huge commitment to the youth of our community who look to 4-H for leadership development and hands-on learning,” said Tara Brower, campaign chairwoman and a board member of the Daviess County 4-H Association. “We’re grateful for Perdue’s commitment to what we do.”

Daviess 4-H works with about 426 students each year to develop citizenship, leadership, responsibility and life skills.