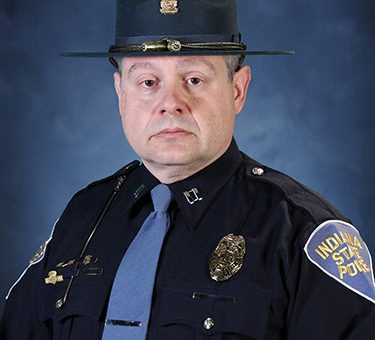 (INDIANAPOLIS) – Indiana State Police Captain Charles Cohen was recently recognized in a ceremony in Indianapolis for achieving 25 years of service with the Indiana State Police. Cohen graduated from the 51st ISP Recruit School on December 4th, 1994. For reaching this milestone, he received an award from Indiana State Police Superintendent Douglas G. Carter that consisted of a framed certificate and a longevity pin to be worn on the uniform.

A native of Crown Point, Indiana, Captain Cohen graduated from Crown Point High School in 1988. Cohen then attended Indiana University in Bloomington, double majoring in Psychology and Criminal Justice and graduating in 1993.

Cohen then attended Indiana Wesleyan University from 1998 – 2000 where he attained his Master’s Degree of Business Administration.

Upon his graduation from the ISP Academy, Captain Cohen was assigned to the Bremen Post where he served as a road trooper until transferring to the Bloomington Post in 1997. Captain Cohen has served on several ISP Specialty Teams including Hostage Crisis Negotiations and the Tactical Intervention Platoon, also known as Riot Team.

Upon his retirement, Cohen will be leaving his most recent position as Commander of the Office of Intelligence and Investigative Technologies and soon be starting his second career as Vice President for Strategic Initiatives at the National White Collar Crime Center.