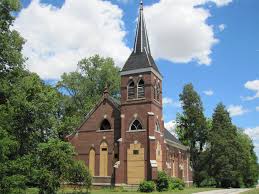 (VINCENNES) — A preservation group that saved an ornate southwestern Indiana church from demolition has found a buyer who plans to turn it into a rural retreat.

Indiana Landmarks spent seven years trying to find a buyer for the former Palmyra Cumberland Presbyterian Church, located just outside of the city of Vincennes.

That perseverance recently paid off when the nonprofit found a private, out-of-state buyer for the Gothic-Revival church, which dates back to 1892.

The new owner plans to restore the building and use it as a rural retreat. The church, which was designed by local architect J.W. Gaddis, retains many of its original, ornate features, including limestone accents and decorative metal finials. The steeple even houses the church’s original bell.

Tommy Kleckner, director of Indiana Landmarks’ Western Regional Landmarks Office, said that the group took a loss on the sale — at less than $30,000 — because staff felt that the building was well worth saving.

“We walked into the sanctuary and saw that beautiful ceiling and rural setting, and we just couldn’t lose this one,” Kleckner told the Vincennes Sun-Commercial.

The Palmyra Cumberland Presbyterian congregation spent decades in the building before permanently closing the church’s doors in 1975. Without a congregation to maintain it, the building fell into serious disrepair.