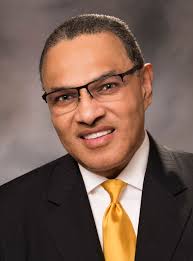 Dr. Freeman A. Hrabowski III, president of the University of Maryland, Baltimore County (UMBC), will give the commencement address, “The Power of Stories.” He also will receive an honorary doctorate of science from the University, recognizing achievements such as his pioneering STEM work at UMBC, which is now among the nation’s leading sources of African-American Ph.D.s in science and engineering.

Born in 1950 in Birmingham, Alabama, he was among 1,000 black schoolchildren who marched for equality and integration in the 1963 Children’s Crusade. Police used fire hoses and dogs on the youngsters. He spent five days in juvenile detention and was later prominently featured in Spike Lee’s documentary, “Four Little Girls,” about the racially motivated bombing Birmingham’s 16th Street Baptist Church in 1963.

Dr. Hrabowski graduated from Hampton Institute with highest honors in mathematics. He received his master’s (mathematics) and doctorate (higher education administration/statistics) from the University of Illinois at Urbana Champaign.

For the past 10 years, the magazine also consistently ranked UMBC among the nation’s leading institutions for “Best Undergraduate Teaching.” Time magazine named Dr. Hrabowski one of America’s 10 Best College Presidents in 2009 and one of the “100 Most Influential People in the World” in 2012.

In 2011, he received both the TIAA Theodore M. Hesburgh Award for Leadership Excellence in Higher Education and the Carnegie Corporation of New York’s Academic Leadership Award, recognized by many as the nation’s highest award among higher education leaders. He serves as a consultant to the National Science Foundation, the National Institutes of Health, the National Academies, and universities and school systems nationally.

There is one commencement ceremony in December, honoring students who have completed their degree requirements by the end of the fall semester. The ceremony is in the 11,500-seat Worthen Arena. Tickets are not required.

The student processional onto the arena floor begins at 9:45 a.m., with lineup at 9 a.m. The event begins at 10 a.m. and should last about two hours.

Parking: Free parking is available around Worthen Arena, 1699 W. Bethel Ave., and other parking lots on campus. Media are advised to arrive one to two hours in advance to avoid traffic congestion. Here’s a link to the campus map.

Background: More details about the day’s events are here.

Live-streaming: The event will be streamed live at bsu.edu.