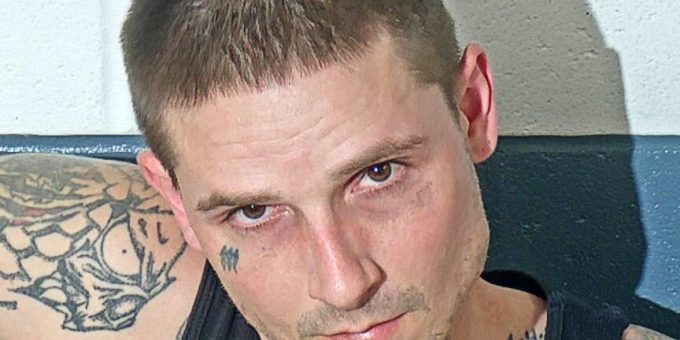 (BEDFORD) – A Springville man was arrested on drug charges after Bedford Police officer received a complaint about a man in dark clothing, wearing a backpack in the area of 17th and O streets Monday morning.

“Officers arrived and could not locate him,” says Bedford Police Chief Terry Moore. “Approximately 45 minutes later (11:15 a.m.) we received another complaint about the same individual near 16th and K streets.”

Officers arrived and located the male near the police department and identified him as, 33-year-old Joshua R. Flynn, of Springville.  While speaking with Flynn the officer noticed a hammer in his sweatshirt pocket and for safety reasons removed it.

“Flynn raised his arms to show the officer he had another hammer up his shirt sleeve,” Chief Moore added. ” The officer removed that one as well and performed a pat-down for any other weapons.  During the pat-down the officer noticed a syringe sticking out of Flynn’s pocket.”

The syringe filled with a clear substance was removed from Flynn’s pocket.

“While trying to place handcuffs on Flynn he started resisting,” Chief Moore added. “After gaining control of Flynn he was escorted into the police department and officers tested the syringe and got a positive result for methamphetamine.”