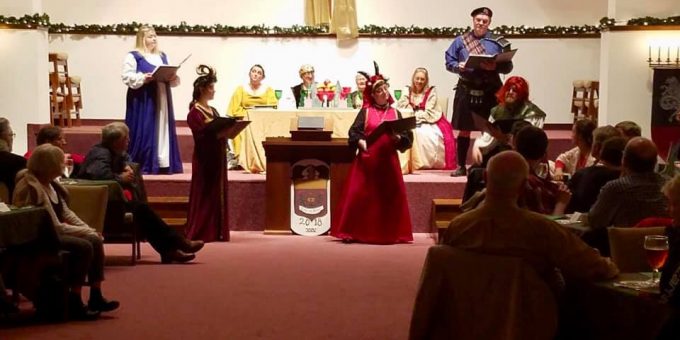 Performances will begin at 7 p.m. and include the traditional 5-course madrigal feast and a chamber ensemble concert of period music. Guests sit family-style at large tables to complete the feel of a medieval feast.

The Madrigal began in 1993 as a dream of Larry Hollan and Gary Spear. This duo had worked on many productions together and Spear had performed with the Indiana State Madrigal group during his college years. It was decided that this kind of production should be brought to southern Indiana. So in 1993, the production of the first-ever Orange County Players Madrigal began under the direction of Spear with Hollan taking on the role of assistant director and production coordinator.

Yuletide Madrigals are performed near Christmas with a focus on that special and sacred time of the year. The OCP Madrigal is performed each year at the end of the first full week of December.

Gary Spear will direct this year’s event and Larry Hollan will serve as the assistant director/coordinator.

The madrigal concert will feature traditional 14th and 15th-century music including “Alleluia Incantation,” “Angels We Have Heard On High,” “Carol of the Bells,” “Magnificat,” “If Ye Love Me,” Cherubim Song,” “Hallowed” and “The First Nowell.”