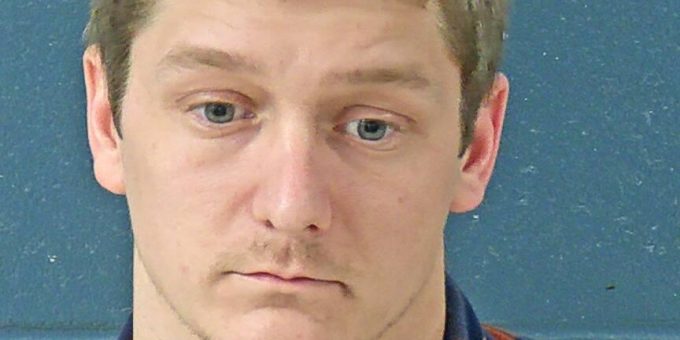 (BEDFORD) – Bedford Police officers arrested a man wanted on a warrant after receiving a tip he was driving in the area of 12th Street and Lincoln Avenue Monday night.

Officers located the vehicle 27-year-old Cody Combs was driving and attempted to stop him after seeing the vehicle enter the alley between 12th and 13th Street and K Street and Lincoln Avenue.

Officers activated their lights and sirens in an attempt to stop Combs.

“When officers attempted to stop Cody he refused and made several turns before losing control and striking a police vehicle,” says Chief Terry Moore.

Officer Bade followed the vehicle through the alley and then Combs proceeded south on Lincoln Avenue while Capt. Jesse Crane went south on K Street towards 13th Street in an attempt to cut the vehicle off.

Combs then make a quick turn onto 13th Street traveling west. At the same time, Officer Tedrow was approaching the intersection of 13th and Lincoln Avenue traveling east with his lights and sirens on. Combs attempted to make the right turn, but due to not being in control of the vehicle he collided into the side of Officer Tedrow’s police vehicle.

Officers Tedrow and Capt. Crane removed Combs from the vehicle.

“Once officers removed Cody from the vehicle they witnessed him drop a baggie with a substance inside, which was later identified as methamphetamine,” Chief Moore added.

Combs was arrested at 6:21 p.m. on charges of resisting arrest, possession of meth and on a warrant for domestic battery.