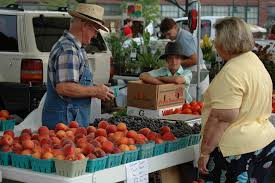 During the panel “Farmers’ Market 2020: Considering Our Options,” participants will review challenges regarding free speech, inclusion, and safety during the 2019 market season, and consider options for the market during the 2020 season.

Those attending the moderated discussion will have the opportunity to submit questions to be addressed by the panelists.

Joining the panel via video call, City of Charlottesville, Virginia Chief of Police Dr. Rashall M. Brackney will be representing the Divided Community Project, for which she serves on the Steering Committee. The Divided Community Project’s Bridge Initiative, operating out of The Ohio State University’s Moritz College of Law, has been working with the City since August to engage the community with regard to deep-seated and divisive social issues.

More information about the Divided Community Project’s work in Bloomington is available here.

“The City is grateful for the expertise of these panelists, together with the vigorous engagement of our residents, in forging a path for the farmers market as we seek to create the most welcoming, safe, and inclusive atmosphere we can,” said Mayor John Hamilton.

The 2019 market season having concluded last week, Saturday’s panel represents part of the City’s ongoing efforts to elicit expertise and engagement in the process of considering the City’s future operation of the market.  After receiving a recommendation from Mayor John Hamilton and the City’s Parks and Recreation Department, the Board of Parks Commissioners, as per municipal code, will have the responsibility of determining the role the City will play in operating the market when it meets in January 2020.

Frequently asked questions about the Farmers’ Market are addressed at the city’s website, where community members may also watch footage of previous public forums. Members of the public may submit additional comments, questions, and suggestions via an online form, where 280 submissions have been received since late July.