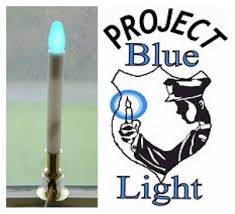 Project Blue Light began in 1989 by Dolly Craig of Philadelphia, PA who put a blue light in her window to remember her son-in-law, Danny Gleason, a Philadelphia police officer who was killed in the line of duty in 1986.

Dolly Craig shared her idea with Concerns of Police Survivors who, in turn, shared the idea with others.

Now thousands of blue lights shine nationwide during the holiday season to honor and remember law enforcement officers who have given the ultimate sacrifice and to show support and thanks for those officers that continue to work in American law enforcement.

Blue lights have been placed in the windows of the Orleans Police Department as well as inside the Orleans Town Hall and will remain lit throughout the holiday season.

From a single candle in a window or a blue porch light to an entire building outlined in blue the message is the same and clear.

The Orleans Police Department is encouraging everyone to participate in Project Blue Light this Christmas season by incorporating “blue” into your seasonal light displays from now through New Year’s.