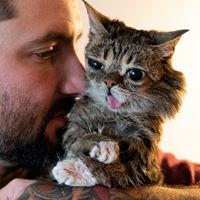 (BLOOMINGTON) – Lil Bub, who raised thousands of dollars to help the homeless animals of the Hoosier State, has passed away.

Lil Bub lived in Bloomington with her owner, Mike.

Discovered as the runt of a healthy feral litter in a tool shed in rural Indiana, she was taken in as a rescue when it was clear that she would require special care. Since then, Bub overcame great challenges, and she was a published author, a talk show host, a movie star, and has helped raise well over $700,000 for animals in need.

Bub suffered from a rare bone condition that caused a deformity in her paws and dwarfism. She only weighed around four pounds and stayed the size of a kitten for her entire life.

The vet told Lil Bub’s owners that she would only live for a couple of years, but she died peacefully over the weekend at the ripe age of eight.

Her owner posted this after her passing on Facebook:

On the morning of Sunday, December 1st, 2019 we lost the purest, kindest and most magical living force on our planet. BUB was cheerful and full of love laying in our bed with us Saturday night, but unexpectedly passed away peacefully in her sleep.. I have always been fully transparent about BUB’s health, and it was no secret that she was battling a persistent and aggressive bone infection. Even knowing this, we weren’t expecting her to pass so soon or so abruptly without warning. I truly believe that she willingly made the decision to leave her failing body so that our family would not have to make that difficult decision ourselves.

It is impossible to put into words the profound effect that BUB has had on my life, on the lives of thousands of homeless pets, and on the lives of those of you that have cared for her as if she were your own family. She taught me everything that I know about unconditional love, she brought my wife Stacy and I together, she’s the reason we have our beautiful children Rosco and Lula, and she has been a constant source of warmth and love in our lives for the past 8 years. To say that our family is devastated would be an understatement.

But most importantly, BUB has made a huge difference in the world of animal welfare, and in the lives of millions of people worldwide. She has literally saved thousands of lives (both pets and humans), she started the first national fund for special needs pets, she was the subject of groundbreaking genetic and biological research, she’s helped raise over $700,000 for animals in need, and has spread a message of determination, positivity, and perseverance to people all over the world. And even though my heart is absolutely crushed by her graceful departure from planet Earth, I know that her spirit, magic, and overwhelming energy are still with us, reminding us every day to be better.

Dearest BUB, I will never forget your generosity, your limitless supply of love, or your uncanny ability to bring so much magic and joy to the world. I am forever honored and humbled that you chose me as your caretaker. Please visit all of us in our dreams often. GOOD JOB BUB.