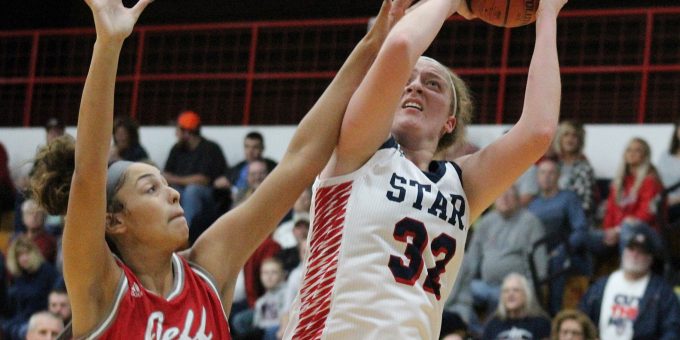 (BEDFORD) – Nobody, at least those with a competitive streak pulsing through the bloodstream, likes to lose basketball games. Definitely not the intense guy with the buzz cut on the Bedford North Lawrence sideline.

So the back-to-back setbacks to No.11 North Central and No.9 Jeffersonville, two high-level opponents that will be postseason factors, were not acceptable. The Stars, now 3-3, fell out of the Class 4A poll, although the Sagarin computer still likes BNL (ranking BNL among the Top 20 in the state).

And there was a lot to like about BNL, even in recent defeats. The Stars had prolonged spurts of excellence that – if maintained – promise something special. BNL could not play much better than the third quarter at North Central, than the first 18 minutes against Jeffersonville.

Those losses also revealed a weakness: turnovers. The Stars succumbed to relentless, full-court, intense pressure, which turned a diamond into coal rather than the desired opposite affect. BNL has averaged 16.2 turnovers in five games (take away Mitchell, which did not test BNL over 84 feet). The ball is too valuable to waste.

“That’s why you play those caliber teams, because they expose their weaknesses,” BNL coach Jeff Allen said. “We feel we have a good understanding of what that weakness is.

“That’s a factor of having young, inexperienced guards out there. They’ve gotten some great experience over the last couple of weeks. We’ll continue to work at that and learn how to finish games.

”We’re playing really well. Finishing games just comes with experience. I don’t like losing basketball games, but I knew there would be a growth period with this team. I like how we’re playing and I think we’ll continue to get better.”

More to like? Madison Webb returned from her three-game absence to rest a sore knee, and she is showing why she’s SIUE bound while averaging 15.3 points. Chloe McKnight is averaging 14.0 points and has already swished 17 treys. BNL just needs to convert at a higher rate (41 percent shooting as a team).

“We’ve got a really good inside-outside punch with those two,” Allen said. “We have some other kids (Irye Gomez at 9.0 and Karsyn Norman at 8.0) that can score in spurts. So we can provide problems for people.

“The goal is to get better as the year progresses. So each game, starting with Zionsville, we’ll try to continue that.”

The Stars, who haven’t lost three consecutive games in three years, will look to end the short skid on Saturday afternoon against the Eagles (2-4), who have a current three-game slump.

The Eagles have struggled offensively, averaging only 44 points per game. Freshman forward Laila Hull leads the way at 10.8 points and 5.6 rebounds.

“Our strengths to this point are that we have continued to work hard despite some adversity, and our young kids are getting a lot of playing time at the varsity level,” Zionsville coach Andy Maguire said. “Our weaknesses are inexperience at the varsity level and a lack of leadership on the floor at this time due to injury.

“We have gotten much tougher and we have improved as a team.  It may not show record wise or on the scoreboard, but we are seeing it at practice.”

“I really like this basketball team, but we’re not good enough to take any time off,” Allen said. “If we don’t, we’re really solid, If we do, if we don’t give our best effort, we’ll have a problem. Those are the type of lapses we can’t have.”

The Stars won last year’s clash 55-44 at Zionsville as Jorie Allen scored 19 points and Jacy Hughes made the Eagles pay for choosing to leave her open as she scored 16 points.

Game notes: BNL has won two of the three meetings in the series. The Stars haven’t lost three straight games since the 2016-17 season. Zionsville hasn;t lost four in a row since 2014-15.