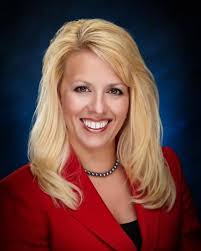 The lighting ceremony will take place in front of the Miss Indiana Statue on the courthouse lawn at 5:30 p.m. with Mayor Girgis flipping the switch to light the Christmas tree in Harp Commons.

The parade will step off at 6 p.m.

Girgis is the 23rd Mayor of Bedford. She began her first term in January 2008 and is now finishing up her third term, thus serving 12 years as mayor.

She and her husband Dr. Kamal Girgis are the proud parents of Vonya, Ramzi, and Zahra.

“Sometimes what is going on in your life helps form your decisions. My mother had just died. In May of 2007, she was only 54. I can remember thinking to myself she didn’t get enough time,” Mayor Girgis said. “She would have done more things. I literally was thinking if I had an opportunity I would not let fear get in the way. And just a few weeks before someone asked me if I would run for office. My first response was ‘NO.’ I was in a job I loved. I think I made more money than the Mayor, but my husband encouraged me to run. My husband said I think you would do an amazing job.”

And that kick-started her political career.

Girgis was the first independent candidate and first female mayor for the City of Bedford.

What does Girgis consider her top five accomplishments?

Mayor Girgis wanted to thank her family for her accomplishments. She shed tears when she talked about the support she received from her family, friends, city employees, and the Bedford City Council.

Currently Girgis is serving as a part-time adjunct instructor at Indiana University in Public Affairs, but she has no immediate plans in the near future. She wants to take a few months off, and then maybe decide in the near future what she wants to do. She also states she would be interested in running for public office again.

This year the parade committee picked a general “Christmas” theme to allow parade entries to focus more on their Christmas lighting than a theme.