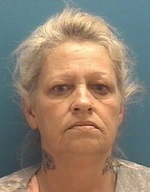 (COLUMBUS) – A Columbus woman admitted before going through the body scanner at the Bartholomew County Jail that she had hidden drugs in a body cavity.

At about 7:52 p.m. Monday night, deputies stopped a vehicle at 11th and Franklin streets. A passenger in that vehicle, 50-year-old Rebecca Roberts, of Columbus, was wanted on a warrant and was arrested.

Sheriff’s Department police dog Diesel detected the presence of narcotics, but none could be found in the vehicle.

Roberts allegedly would not respond when asked by deputies if she was carrying drugs.

When told that she would have to go through a body scanner at the jail, she admitted to police that she had meth and marijuana hidden inside a body cavity.

Roberts was taken to Columbus Regional Hospital where the drugs were removed and she was cleared and then arrested on the warrant in addition to charges of possession of meth and marijuana.