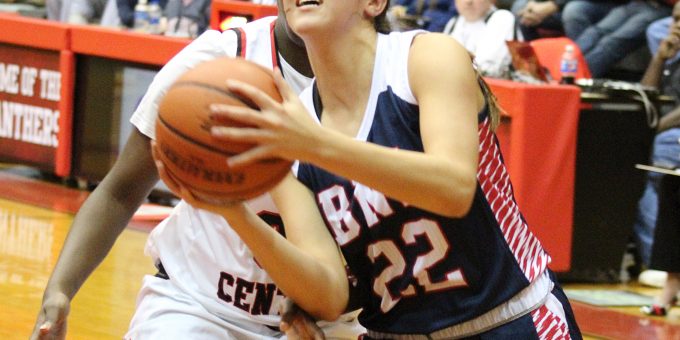 (INDIANAPOLIS) – A great prize, a road victory against a ranked opponent, was in the grasp. And in the span of time it takes to boil an egg, North Central’s tenacious defense boiled down Bedford North Lawrence.

Down 48-40 with 6:05 left, the No.10 Panthers clawed back, forcing No.12 BNL into critical mistakes during a 17-1 run that wrenched the win away from the Stars. North Central escaped with a 59-52 triumph, its fifth straight in the series, on Friday night.

Chloe McKnight shot the Stars (3-2) in front during a fantastic third quarter, and Irye Gomez’s corner trey powered BNL to the eight-point advantage. That’s when the Panthers (3-2) dialed up maximum pressure and got maximum results.

“They’re a great pressuring team,” BNL coach Jeff Allen said. “They went after us. Their back was against the wall. They really came after us and we did a few things that were uncharacteristic.”

BNL’s 8 fourth-quarter turnovers, and North Central’s 12-1 edge in free throws during its late surge, were the keys. Makenzie Carroll started the comeback with a 3-pointer, Ava Couch converted a steal into a three-point play, and Alivia Terry buried a bomb during a three-minute burst that turned BNL’s hard-earned lead into something soft.

“We weren’t doing anything, to be honest, we were supposed to be doing,” North Central coach Dee Ann Ramey said. “So we put in five people we thought could play defense, and that’s what turned the ballgame around.

“That’s the point we have to make with our players. Defense wins ballgames.”

It won this one. When BNL protected the ball, it was superb. When it did not, it was vulnerable.

“Their effort was outstanding,” Allen said. “Do we have things to get better at? Yes. But to me that’s a high-level team and we were in a great position. We just made some mistakes, But we’re learning and getting better.”

BNL could not be much better than the electric third period. Trailing 31-25, McKnight exploded with 13 points, hitting three treys during the blitz. Madison Webb, finally back from her three-game absence, put BNL on top for the first time with a close-range bucket, and McKnight scored the next 10 points.

Gomez started the fourth with a driving layup and her corner jumper. That would be BNL’s last basket until Karsyn Norman’s frantic 3-pointer with 52 seconds left. By then, it was too late for a miracle rally.

“We had a couple of bad breaks with shots not going down, a couple of untimely turnovers. I don’t think we got to the line much at all, which hurts you. And that’s going to happen.”

Jasmine McWilliams, a Northwestern recruit, had 15 points while Nakaih Hunter totaled 12 points and 12 rebounds for the Panthers.

The Stars will return home to face No.8 Jeffersonville in the Hoosier Hills Conference opener on Saturday. The Red Devils (5-1) dropped a 65-60 decision to Silver Creek on Friday night.