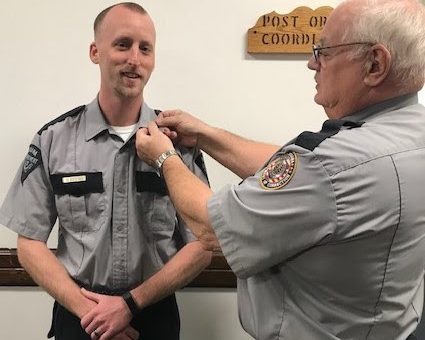 Benjamin began his career as a Correctional Officer with the Indiana Department of Correction (IDOC) on May 24, 2010.  During his time with the Department he has worked a variety of posts including G Housing Unit (GHU) and the Secure Confinement Unit (SCU) on K Bracket, Trips and Yard on H Bracket and K Housing Unit (KHU) on 5 & 2.

Benjamin has shown his ability to work with some of our more difficult offenders.  He has also done excellent adapting to the operational needs of each area.  Both are very important leadership skills.  Benjamin will undoubtedly benefit from his past experiences as he takes on his new responsibilities as a Correctional Sergeant.

“Benjamin has proven his ability to work in some of the more challenging units within the facility regardless of their differences.  As such, I feel he will do well adapting to his role as a supervisor in whatever area he is assigned,” said Major Dusty Russell.