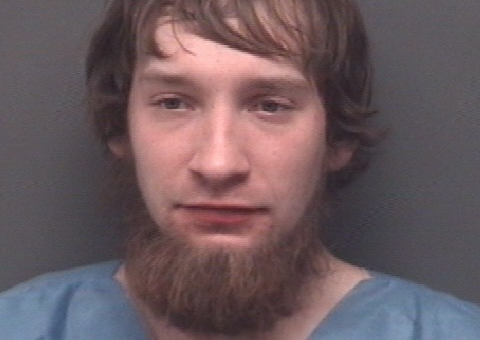 Trooper Austin Keller stopped the vehicle on St. John Road south of Baseline, but then Martin pulled away from the traffic stop continuing north on St. John Road accelerating to approximately 80 miles per hour before driving west on Seven Hills Road into Vanderburgh County.

Martin traveled on several different county roads before troopers were able to deploy stop sticks on Old State Road at Volkman Road. The stop sticks deflated both driver’s side tires.

Martin continued south on Old State Road at a slower speed until he drove off the right side of the roadway and collided into a utility pole at Inglefield Road at 9:50 p.m.

Troopers ordered Martin out of the vehicle, but he refused. An Indiana State Police K-9 Boomer was deployed and apprehension was made, but Martin continued to resist and used the vehicle’s door to strike the K-9. Trooper Keller tased Martin before finally taking him into custody without further incident.

Martin was transported to Deaconess Midtown where he was treated and released for his injuries. He is held in the Warrick County Jail on charges of resisting arrest, driving while intoxicated and reckless driving.