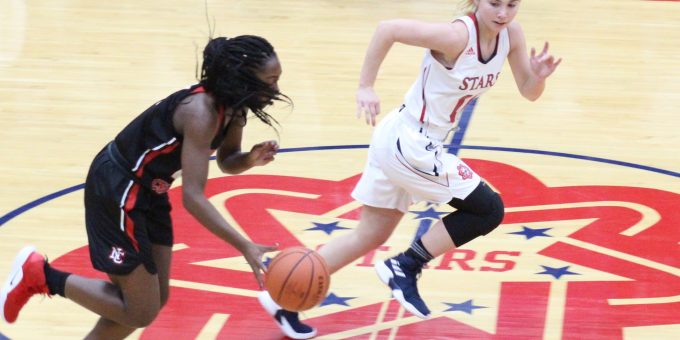 (BEDFORD) – The whole idea behind playing high-level, top-shelf competition in November is preparation for February. Bedford North Lawrence, a program that backs down from nothing, will definitely discover where it stands in terms of progress and potential problems on Friday night.

Webb, out since hyperextending her troublesome right knee the week after the season opener, is expected to return (if a doctor visit concludes with positive results) in time for BNL’s toughest challenge yet.

Don’t be fooled into overconfidence by No.10 North Central’s record (2-2 after a loss to No.3 Lawrence North on Wednesday). The Panthers possess the defensive temperament and sheer size to make the Stars work in their uncomfortable zone.

Rebounding has already been an issue for BNL, and North Central’s size advantage up front with 6-4 junior center Dynasty Witherspoon, 6-3 junior Meg Newman and 6-0 junior Nakaih Hunter will be a tall order to overcome. Turnovers have become a concern after the Stars have totaled 15-plus in three of the four games, and North Central will press that button with full-court tenacity.

“They like to press, get you to turn the ball over,” BNL coach Jeff Allen said. “We have to be focused on breaking the press and getting into our sets, but the big concern is rebounding. We have to keep them off the offensive glass. You have to limit their offensive capability by keeping them off the glass.

“If we can do those two things, I like our chances.”

North Central has won four of the five meetings, and last year’s 62-47 victory at BNL Fieldhouse pinpointed the Panthers’ prowess. BNL had 17 turnovers, North Central had a 44-29 rebounding edge, and future Miss Basketball Jorie Allen was limited to one field goal.

So how does BNL counter? First, the effort and energy that triggered the comeback win over Bloomington South on Tuesday night must be duplicated. BNL’s defense was suffocating, forcing South into 10 late turnovers, and the decision making that got BNL in trouble was vastly better in the final frame.

“That’s the experience factor,” Allen said. “Some of these kids don’t have a lot of varsity experience, so I think those (turnover) numbers will taper off. We have to have a lot of fight and determination. When we really focus on it, they know they can do it.”

Webb’s presence in the post will help as well. She scored 16 points in the opener at Mooresville. While Peyton Sweet and Haley Deckard have taken turns filling that void, the 6-3 senior and SIUE recruit has been missed.

“I’ll be a lot happier having her back,” Allen said.

North Central lost to BNL victim Brownsburg 59-47, but crushed BNL conqueror Mooresville 79-43, for whatever score comparison is worth. The Panthers went up 14-2 on Lawrence North before fading and dropping a 70-65 decision.

Last meeting: Last year at BNL, Nakaih Hunter had 15 points and 8 rebounds as the Panthers clawed to a 62-47 win. Meg Newman added 14 points, and North Central forced 17 turnovers. Chloe McKnight had 24 points for the Stars, who lost center Madison Webb in the first quarter with a knee injury.