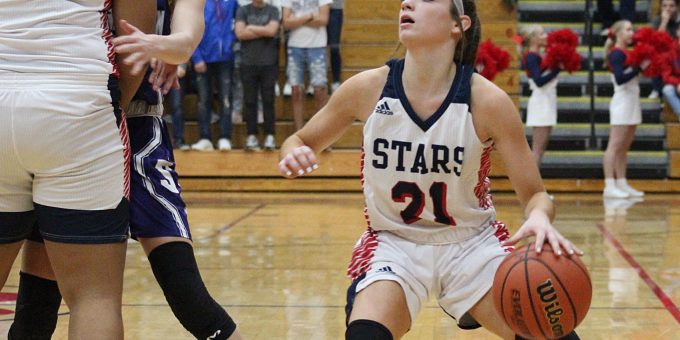 (BEDFORD) – Down, frustrated, headed for disaster, with tears starting to redden some eyes as the situation escalated, Bedford North Lawrence relied on its core value to wrest back victory from the edge of the precipice.

Trailing by 10 in the second half, and it felt like more, the No.12 Stars turned into defensive demons, attacking with relentless pursuit of nervous dribblers, and rescued themselves when all seemed lost.

BNL battled back with a gutsy fourth quarter, erasing a 31-25 deficit with nine straight points en route to an anxious, high-strung, 43-35 triumph over Bloomington South on Tuesday night. Freshman guard Karsyn Norman scored a game-high 13 points and junior Chloe McKnight had the bulk of the late points to pace the Stars (3-1) to a twisting, rough-road win of will.

The Panthers were guilty of their own demise with 10 turnovers (and 26 total) in the final period as their lead, as their confidence, as their simple ballhandling skills, vanished.

Anyone calling this triumph a thing of beauty needs an immediate vision check. Both teams gave away turnovers faster than Congress wastes money. The Stars were behind because of their tidal wave of miscues (16 through the first three quarters). But the refusal to lose can’t be measured in stats.

“They were letting the way the game had gone affect them mentally,” BNL coach Jeff Allen said. “To me basketball is like life. You’re going to have adversity. How do you respond? Are you going to stand and fight or sit there and pout about it?

“They decided to stand and fight, which I expect out of my kids.”

The final comeback was not brilliant, just toughness. McKnight drove for a three-point play to ignite it, Haley Deckard converted a missed free throw into another three-point trip, and the South lead was erased. From that point, the Stars could sense the panic.

Irye Gomez drove the baseline for a bucket and a 38-35 lead with two minutes left, Gracie Crulo-Rood plunked home a free throw off the back iron, and Norman sealed the outcome with an 8-footer. That was a great escape.

“We were really bad, then we were really good,” Allen said with a sigh. “They’re a tough team to play against. Year in and year out, our games are slugfests, defensive battles. They had my kids out of sorts. They’re very competitive, they guard very well, and they took my kids out of their rhythm. They didn’t know what to do.

“Thank goodness they figured it out. That’s a tough win.”

For many minutes, BNL threatened to finish with more turnovers than points. When the Panthers, who have had their own offensive struggles during what is now a three-game losing streak, caught fire with three treys in the second quarter, South had a 21-17 halftime lead. When BNL didn’t score in the third quarter until a Norman bucket at 3:17, the margin was double-digits. And against South’s tenacity, that was like 20, in Allen’s mind.

But then South (2-3) started to implode, and BNL took advantage.

“They forced us into some horrendous passes,” South coach Larry Winters said. “It just kind of snowballed.

Norman was the lone offensive bright point, quite impressive for a rookie in that tense atmosphere, while McKnight finished with 10 and Deckard totaled 8 as BNL played without senior center Madison Webb for the third straight game.

Anya Friend had 7 points, including a pair of 3-pointers, to pace South. It’s hard to score when the ball slips away from unsure hands in the face of tremendous pressure.

“We started pressuring a lot more. We really got into them and made them handle the ball. Once we started trapping and they started throwing it away, we knew we were doing the right thing.”

“We got some things going with our pressure and hustle,” Allen said. “Gracie (who had a game-high 6 rebounds) played an outstanding game. She was the one kid who really tried to pressure and lead.”

BNL, with Webb expected to return, will visit North Central on Friday night.