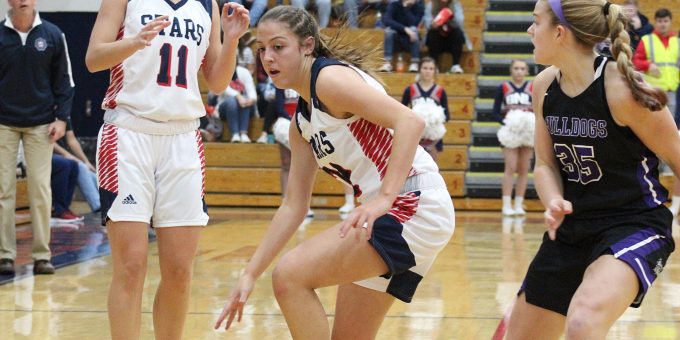 (BEDFORD) – Progress is easily defined in the win-loss columns, and Bedford North Lawrence certainly revolved 180 degrees in one week: one step back, two steps forward.

After the disappointing opening loss, the Stars rebounded with two impressive wins last week – both without starting center Madison Webb, which made the conquest of No.4 Brownsburg and the blowout of Mitchell even more admirable.

Webb, sidelined for precautionary measures after suffering a hyperextended right knee in practice, is expected to return on Tuesday night when the No.12 Stars (2-1) host Bloomington South (2-2).

Webb’s absence forced the Stars to develop depth quicker than anticipated. Peyton Sweet filled in well in the starting spot (9 points against Mitchell) and Haley Deckard was a hero against Brownsburg (a career-high 13 points off the bench).

“I think we had a great weekend,” BNL coach Jeff Allen said. “We definitely made advancements from last weekend, and that’s the whole name of the game. Get better every week.”

With Webb, who had 16 points in the opener at Mooresville, back in the middle, BNL will now face another brutal week of quality opponents. All three (South, North Central and league nemesis Jeffersonville) were ranked in the Class 4A poll, although South’s recent two-game skid cost the Panthers that status.

“All three of them are tests, there’s no doubt,” Allen said. “It’s a sectional week, they’re all quality opponents. It’s a big week for us.”

Are the Stars ready? “I think so,” Allen said. “We’ve really come a long way in the last two games, built some confidence. I feel like we’re ready.”

The Panthers got off to a fast start with wins over Pike (71-53) and Edgewood (70-22 while forcing 34 turnovers). But they started a four-game road swing with back-to-back offensive struggles against Columbus East (54-43 as East’s Koryn Greiwe poured in 32 points) and Jeffersonville (43-32 as Nan Garcia had 24 points and 13 rebounds).

South lost spitfire guard Addy Blackwell, who had 17 points against BNL last season, to graduation. The Panthers will count on more production from senior guards Kristen Ridner (11.0) and Anneke Furr (8.5).

BNL’s Chloe McKnight has been the scoring force at 14.7 (already hitting 10 treys) while Irye Gomez has added 7.3. Other Stars have taken turns in adding offensive punch, the latest being freshman guard Karsyn Norman (15 against Mitchell).

Last meeting: Last year at South, Allie Fugate’s 3-pointer with 12.9 seconds left powered the Stars to a 53-50 win. Jorie Allen had 26 points and 15 rebounds for BNL. Addy Blackwell had 17 points for the Panthers.