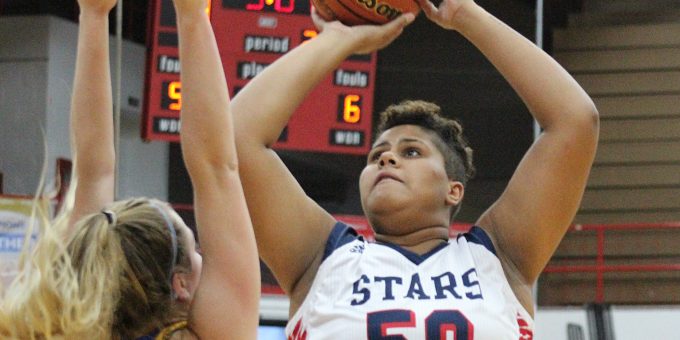 (BEDFORD) – How sweet it is, to have depth, to have confidence when a star goes down, to have a weapon on the bench to unleash.

How Sweet it was, to have senior Peyton Sweet key a second-quarter breakaway with her inside force, to have freshman Karsyn Norman have her breakout game. And to mash Mitchell for the 11th straight time in the county rivalry.

Sweet ignited BNL’s charge, Norman was the explosion, and BNL’s defense – after an anxious start – was impenetrable as the Stars bounced the Bluejackets 66-22 on Saturday night. Norman posted a career-high 15 points, Sweet totaled all 9 of her career-best in a dominant second period, and Mitchell went forever without a field goal.

On the night BNL honored 2019 Miss Basketball Jorie Allen by retiring her No.33, the Stars retired Mitchell’s attack. After the Bluejackets, who were splendid early, took an 11-10 lead on Jayden Shaff’s lane drive late in the first quarter, BNL didn’t allow another field goal until the 5:46 mark of the third.

During that span, the Stars erupted with 30-1 fury. That ended any suspense.

“I challenged the girls after the first quarter to tighten up defensively, and I thought we did that,” BNL coach Jeff Allen said. “To come out with the effort we had, and the execution we had, I’m really proud of them.

“I thought my kids did well. I thought they played with intensity, they executed well.”

Sweet was sweetness in the post, scoring off an inbound lob, rebounding her own miss for a putback, muscling through a defender for a low-post bucket, and converting a layup off a sugary pass from Gracie Crulo-Rood. That all came in a three-minute blast.

“She’s capable, with her size and athleticism,” Allen said. “She has good hands, with some of those moves around the post. She really can help us. Now, when I get Madison (Webb, out with a hyperextended right knee for the second straight game) back healthy, I have some big kids and some depth there. That makes us even better.”

Norman, a spunky freshman with unlimited potential, helped the Stars finish off the blowout, slashing to the rim for two layups and draining a trey from the key. It’s amazing how well someone plays when the nerves are calmed and the shots are falling.

“I was really nervous playing Brownsburg (on Friday),” Norman said, and her turnover total revealed that. “Tonight helped a lot, helped my confidence. I hit the three at the beginning, and I started being more relaxed. And then I just took off.”

“That’s a work in progress,” Allen said. “She has the skill, it’s just the experience. She has to relax out there and that will come. In January, she will be a different looking player than she is right now.”

BNL (2-1) also got 12 points from Chloe McKnight and 8 from Irye Gomez, while Makena Moore came off the bench for 8 points and a team-high 6 rebounds.

For the Bluejackets (1-2), the opening 7 minutes were special. The next 16 minutes – only three points – were not. Mitchell had 21 turnovers and hit only 8 of 30 shots.

“We got tired,” Mitchell coach Jamie Cummings said. “We haven’t been able to practice hard enough (with only 12 players on the roster) to be in shape the way we need to be, We can’t sub as deep as I would like.

“We quit talking, quit moving the ball, settled for quick shots. we got silly. Our success is to be patient and not settle for the quick shot. We got sped up.

“I couldn’t ask for the girls to play any better in the first quarter than what they did. When you get tired, things change in your head. It was ‘Oh my goodness. Do we belong?’

“Then the wheels truly came off.”

Maddie Robertson and Jordyn Sarver had 6 points each for Mitchell, which has lost the 11 in a row by an average of 42.5 points.

The Stars, who expect to have Webb return for the next game, will host 4A No.12 Bloomington South on Tuesday.