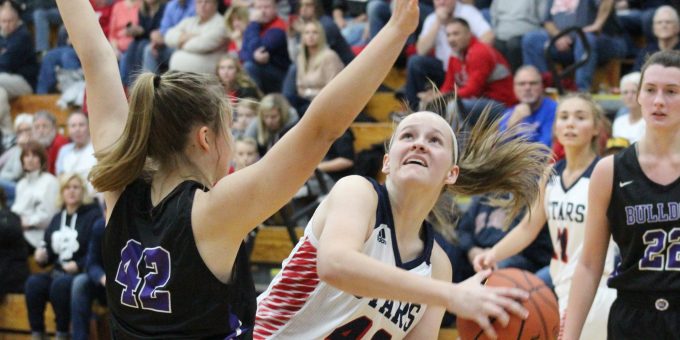 (BEDFORD) – With a hole in the middle, with senior center Madison Webb sidelined with a late-week knee injury, Bedford North Lawrence was a little lost in space. And along came Haley, a streaking comet, to the rescue.

Those bright space rocks hurtling through the heavens leave a trail of dust, and that’s what the Stars did to No.4 Brownsburg’s guard-heavy offense, reducing it to unidentified rubble as BNL stunned the Bulldogs 48-37 on Friday night.

Chloe McKnight scored 17 points, but without the brilliance of junior Haley Deckard off the bench, without the emergency start and solid play of senior Peyton Sweet, BNL (1-1) would have been ziggy stardust. Webb, who suffered a hyperextended right knee on Thursday and sported an ice pack, was a huge void to fill. Deckard did that almost perfectly.

The left-hander was 6-of-6 from the field, thanks to driving-and-dishing teammates, on her way to a career-high 13 points. BNL coach Jeff Allen used the coach-speak phrase “Next man up.” Haley was the next girl in line.

“Not having Madison was a huge disadvantage for us, but it’s a team sport,” Allen said. “Peyton Sweet and Haley Deckard were crucial tonight – both of them. That’s the thing I love about basketball, you can have kids step in and do that, and the whole team relishes in it. They had a chance to make a difference, and they did.”

The other difference was defense. BNL locked down the Bulldogs (3-1) with an intensity that was lacking in the season opener, with a purpose to shut down Brownsburg’s backcourt weapons. Ally Becki, averaging 16 points per game, was limited to half that.

The Bulldogs were held 20 below their season average. That’s how a short-handed team can conquer a favored opponent. A lot of grit, a lot of pride, and a lot of willpower.

“I was proud of our defensive effort and rebounding. That’s where we played the best.”

BNL took control in the second quarter, taking the lead for good on Karsyn Norman’s banked 3-pointer. Deckard followed with her first post layup, McKnight swished a trey, and Gracie Crulo-Rood drilled an open bomb. Suddenly, and the Brownsburg bench showed the shock, the Stars had a 12-point lead.

And it was protected. The Bulldogs creeped within 5 in the third quarter, prompting a take-a-deep-breath timeout, but back came McKnight with another bomb and back came Deckard with a layup off Irye Gomez’s pinpoint pass.

“I was always the open one,” Deckard said, praising her guards for the penetration and willingness to find her. “It was great, honestly. I had to push harder, everything is harder. But it was more fight.”

Brownsburg’s Allison Bosse had 19 points, but the key was the blanket on Becki. She didn’t score until late in the first half, hitting a last-second trey, and was swarmed.

“I thought Bedford took out our key players,” Brownsburg coach Debbie Guckenberger said before predicting a quiet bus ride home. “We had very little scoring from our top kids. They basically cut the head off the snake with us. They executed better than we did.

“All the credit to Bedford,” … and then she paused, searching for the explanation … “We scored 37 points. We weren’t aggressive. When you meet a team on the road, with a lot pride in the game and a tradition of winning, you have to be a little better prepared. Every one of their kids took it to another level.”

McKnight hit three bonus bombs, but she did a lot of damage at the line (8 of 9). Gomez finished with 8 points. And BNL, criticized for its lack of rebounding in the opening loss at Mooresville, was dominant in that stat by a 32-20 count. Deckard had a team-high 7, by the way.

“They were really focused, really zeroed in,” Allen said.

Next, BNL will host Mitchell on Saturday night. Webb was a game-time decision against Brownsburg, and her status could be the same for the county rivalry. Mitchell (1-1) stopped Perry Central 59-46 on Friday night.