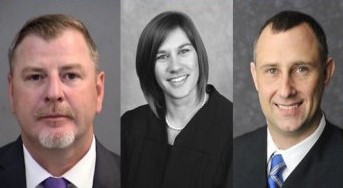 (INDIANAPOLIS) – The Indiana Supreme Court has temporarily suspended three judges who were involved in a fight in downtown Indianapolis during which two of them were shot.

The order Tuesday says the justices imposed the suspensions after finding that Clark County judges Andrew Adams and Bradley Jacobs and Crawford County Judge Sabrina Bell engaged in judicial misconduct during the May 1 fight outside a fast-food restaurant.

The order says all three were intoxicated “and behaving in an injudicious manner” when a night of bar-hopping led to the fight during which Adams and Jacobs were shot.

That fight led to charges against Adams and two other men .