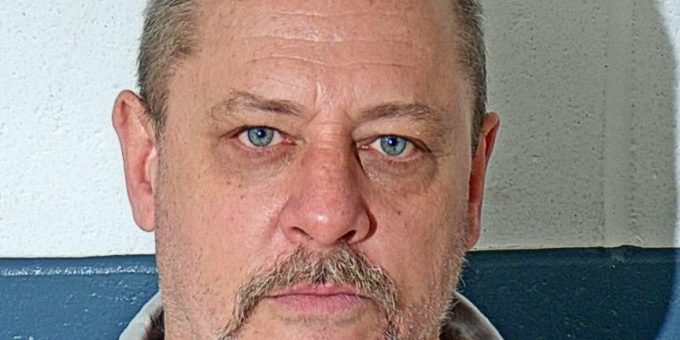 (BEDFORD) – A Bedford man was arrested on burglary and theft charges on Tuesday.

Bedford Police arrested 53-year-old Lanny Berlin, of 530 Skyline Drive
on charges of burglary of a dwelling and theft.

According to a Lawrence County Superior Court I probable cause affidavit, Bedford Police Detectives were alerted to the burglary on June 19th at 2:14 p.m.

A female told police that when she arrived home to her trailer that she shared with Berlin on Skyline Drive she found someone had broken into her home and stole her television.

As BPD Detective Kye Louden was returning to his vehicle, he was approached by a male who also reported someone had broken into his mobile home and stole his television and ransacked the trailer.

When Detective Louden and Major Detective Kevin Jones entered the mobile home they found items tossed around and some of those items had been broken.

The owner of the trailer told police he had left for work in French Lick at 3:30 a.m. on the morning of June 19th and returned around 3:30 p.m. and found his front door open. The owner told police he always locked his doors when he left. When he entered the trailer someone had trashed the place and he noticed his flat-screen television missing along with a white table lamp and a three pounds package of ground beef and five Diet Cokes were missing from the refrigerator.

The owner of the trailer then went through his home and noticed other rooms had been ransacked and broken glass all over the living floor.

Detectives found a living room window on the northside of the trailer had been left slightly open and the screen was off the track.

The owner valued the television around $500 and the value of the lamp and food at $50.

After taking statements from the victims, police found a fire burning outside of the male’s mobile home. In that fire was a portion of a broken pool stick. Detective Jones had seen the other half of the pool stick in the living room of the victim’s trailer.

Police gathered that for evidence. They also found a broken piece of glass that came from the northside window of the trailer. The glass had a handprint on it and boot prints were located in the mud near the window. Those items were photographed and processed as evidence and submitted to the Indiana State Police Crime Lab for processing.

On October 21st. the crime lab reported their results. The fingerprints on the items came back to be Lanny Berlin’s fingerprints.

Later that day, detectives spoke to Berlin about the burglary and thefts. Berlin lives next door to the victim. Detectives told Berlin they had received lab results from the Indiana State Police, but before police could reveal what was found Berlin told them his fingerprints would be found in the trailer because he had brought a package to the trailer at one time.

Police then revealed the fingerprints were found on the broken glass.

Berlin then changed his story stating he wasn’t the person that broke into the mobile home and then changed his story again saying he did steal the television but didn’t recall damaging anything in the trailer because he was messed up on dope at the time. He did admit to breaking a pool stick and burning it but said he had found it across the street.

Berlin told detectives he would attempt to get the television back and pay for the other items.

Berlin was then asked about the stolen television and other items from the trailer he shared with the woman who reported them stolen.

Berlin told police the female did not know he had taken the items but the items belonged to both of them.

The owner of the items was contacted and was told Berlin was responsible for the burglary, damages, and theft and offered to pay for the television and other items. The male told police he wished to pursue charges.