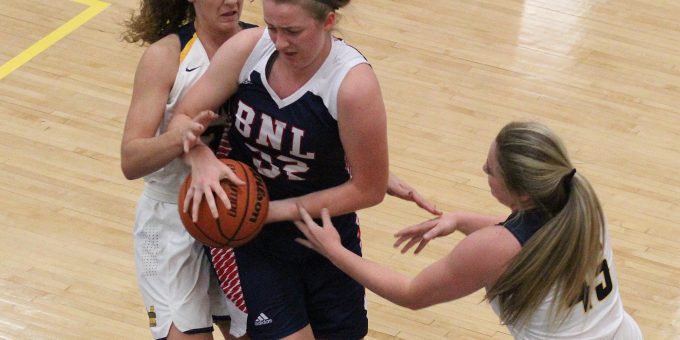 (MOORESVILLE) – In the old days, before corporal punishment became socially unacceptable and politically incorrect, teachers were armed with “the board.” Anyone out of line got swatted on the backside with those thick paddles of myth and legend.

Mooresville went old-school to punish Bedford North Lawrence, and the Stars felt the sting of defeat, right where it hurts the most. The Pioneers taught them a tough lesson.

The physical Pioneers (2-0) pounded Class 4A No.10 BNL into submission, posting an amazing 26-11 rebounding advantage in the second half while rallying from a 7-point deficit to smack the Stars 55-50 on Saturday afternoon.

Madelynn Denny scored 19 points, sparking Mooresville’s late comeback to spoil BNL’s season debut. Paige Gregory added 16 points, but those weren’t numbers that did the most damage. The 16 offensive rebounds, including those that led to second-chance points in the fourth quarter, were the problem. That was a spanking.

BNL owned a 43-36 lead with 6:50 left, then went the next 5:50 without a field goal. Mooresville scored twice on third-shot possessions while pulling away, exposing BNL’s lack of size and lack of experience in close-out situations.

Rebounding has been a concern since BNL struggled in that areas during June scrimmages. And it’s again a problem after BNL got whipped in that key area.

“We’re not a very big team, but we played with a lot of effort, determination and heart,” Mooresville coach Mark Hurt said. “That’s how we were able to really hit the boards. We talked about how important that was going to be.”

Certainly was. Mooresville had two guards (Denny and Abby Young) with 10 rebounds each, while reserve guard Ally Graber grabbed 8. That trio combined was one shy of matching BNL’s team total.

BNL owned a 43-36 advantage after Madison Webb scored from point-blank range early in the fourth quarter. Mooresville answered with Denny’s trey and transition layup, then pulled even on Gregory’s breakout bucket. The Pioneers took the lead for good on Young’s corner bomb with 3:11 left.

The big blows came next. Addi Shafer scored after two misses, and Denny struck again at the end of a three-shot possession. When Denny scored off an inbound set for a 52-44 lead (that’s a 16-1 run, for those keeping track), BNL was already bound for the principal’s office.

“We knew it was going to be tough coming up here,” BNL coach Jeff Allen said. “I don’t think we played particularly well. There was a lot of inexperience, a lot of mistakes made. We made some bad decisions, both from shot selection and execution.

“Rebounding is an issue. You have to get stops, you cannot give them two or three opportunities.”

Webb paced BNL with 16 points while Chloe McKnight drained four treys and totaled 15. When BNL stopped the turnover leakage (11 of its 15 in the first half), it was in command. The best blast was a 10-0 run that ended the third and started the fourth, courtesy of a McKnight jumper, a Webb post move, Karsyn Norman’s lane drive, and the Webb score that built the 7-point margin.

But then poor shots (3 of 12 in the fourth quarter) and weakness on the glass was a fatal combination. The Stars went silent until Jenna Louden’s drive with 59 seconds left.

“It’s disappointing to start the season wth a loss,” Allen said. “I don’t think we played well, but we have to got back to work and get better.”

Denny was 1-of-10 shooting the first half before finishing on fire (6 of 8 in the second).

“I thought our girls fought hard,” Hurt said. “That was a really good win for us. Bedford has gotten the better of us the last three years, so it feels pretty good to get them.”

BNL will have little time to recover. The Stars will face Class 2A No.9 Vincennes Rivet in the home opener on Tuesday night.