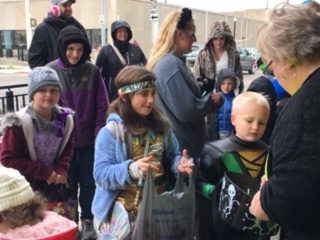 (BEDFORD) – The “Scare Around The Square” brought goblins and ghouls, superheroes and mythical creatures to downtown businesses where the owners were anxiously waiting for the youngsters.

Despite the weather, there were plenty of monsters wanting to load their buckets up with candy and other goodies.

“I always enjoy events that bring events and people to our downtown,” said Julie Bailey Bex of Bailey’s Flowers.

Next door was Turner Contracting, who were smiling and handing out treats to the little ones as they went from one store to the next.

Following the downtown “Scare Around The Square,” many went into neighborhoods throughout Bedford, stocking up on more treats.

The area around 14th and M streets was full of trick or treaters.

“We moved down here to Bedford about five years ago, and really enjoy the town,” said Bill Hoeferlin who moved his family to Bedford from Rensselaer, Indiana.

In the 1400 Block of 14th Street, a nice witch was brewing up a spell as several of the occupants added extra ingredients to the fire.

The next event will be Christmas Around the Square on December 7th. Be sure to mark your calendars to attend the festive downtown event.