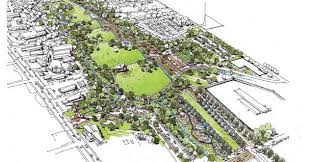 (BLOOMINGTON) – The City of Bloomington is excited to announce that Switchyard Park will be unveiled to the public November 16 and 17.

Community members are invited to a ribbon-cutting ceremony and program Saturday evening, November 16 from 6 until 8 p.m.  The pavilion opens at 6 p.m. with building tours and free refreshments, with a formal program beginning at 6:30 p.m. featuring remarks by Bloomington Mayor John Hamilton and special guests. The evening culminates with a grand reveal of the lighted park.

Switchyard Park grand opening activities continue on Sunday, November 17 from 11 a.m. through 3 p.m. Free interactive children’s activities and live music are scheduled to take place throughout the day, with food available for purchase from food trucks. During Sunday’s festivities, Bloomington Parks and Recreation staff will welcome visitors to use the park’s features and amenities for the first time, providing demonstrations, equipment for play, and information.  Staff will facilitate a three-point shot contest, pickleball and bocce ball demonstrations and games, and use of the fitness station area. During Sunday’s event, the new Switchyard Park community gardens, with 39 raised garden beds available for rent by the public next spring, will also be on display. Visitors Sunday will also be invited to inaugurate the skate park.

During Sunday’s event, tours will be offered of the new Bloomington Police Department Substation, a remodeled former railroad yard operations building at the park’s northernmost end at Grimes Lane.

Switchyard Park’s past as a hub of railroad industry involved a significant transformation of the site, including environmental mitigation and “daylighting” Clear Creek that was once buried in culverts. Bloomington Parks and Recreation’s natural resources staff will be present at the site of the daylighted stream to explain the positive environmental impacts of the daylighted stream, and of the hundreds of native trees, flowers, and plants that have been and will be planted in Switchyard Park.

The City of Bloomington purchased most of the land that is now Switchyard Park in 2009. A vision carried forward over four administrations, the TIF-funded $34 million project approved by the Redevelopment Commission was designed by Rundell Ernstberger Associates, an Indianapolis-based landscape architecture firm, through a months-long master planning process to collect input from city residents, stakeholders, interest groups, environmental advocates, and neighboring property owners.