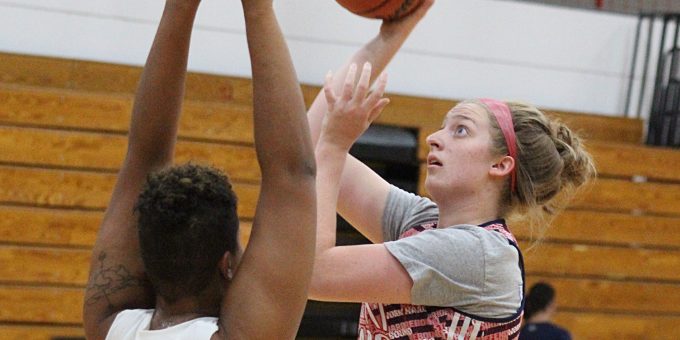 (BEDFORD) – Time never stands still. In fact, it picks up speed with age. So it doesn’t seem possible Jeff Allen is starting his sixth season as the head coach of the Bedford North Lawrence girls basketball program.

What has he done during this moving-at-warp-speed period of his life? Win. Often. His record is impeccable: 112-25 with five sectional titles (continuing BNL’s championship dynasty of eight straight) and a regional crown. He has upheld the tradition, added to the legacy, quite an accomplishment considering the pressure and expectations that came with the job.

Does he wish he could turn back the clock? Probably. Doesn’t everyone? But the bells continue to chime, and on Monday the ringing signaled the first official day of practice for the 2019-20 campaign.

It’s a new day, a different day, at BNL. For the first time during his tenure, Allen will not have a daughter in uniform. For the first time in almost a decade, the Stars might not be the preseason favorites in the Class 4A sectional. Time will tell on that. Betting against the guy with the 82-percent winning percentage, the guy with a new challenge as motivation and three returning starters, would not be wise.

“They talk to you about how, as you get older, time moves faster,” Allen said. “In realty it sure seems like it does. I’ve been really blessed the first five years because I’ve had really good kids, an outstanding coaching staff. So we’ve had success because of the talent we’ve had, the support we’ve had from the community. Hopefully we can continue that.”

This wasn’t a typical Day 1, with multiple issues to sort through, questions to answer, decisions to make. BNL took advantage of the June scrimmages, took advantage of the early practice sessions during the September time frame. The Stars, 23-6 a year ago, hit the hardwood in ‘Let’s Go’ mode: eager, excited, edgy.

“The excitement level is very high,” senior guard Gracie Crulo-Rood said. “We’ve very excited. We worked really hard in the offseason. We’re excited to see what we can bring.”

There are questions to answer, in time. BNL lost six seniors from last season, and one of those wore No.1 during the Indiana-Kentucky All-Star series last summer. Jorie Allen graduated as the all-time leading scorer in school history, as the second Miss Basketball in program history, and that’s a huge void, no matter how talented the successors.

BNL must find offensive production, must appoint and follow team leaders. The Stars must develop an identity.

“I really like the pieces we have this year,” Allen said. “A lot of times, people will say we lost a really good senior class off a great team. I feel really fortunate in that we have a lot of strong basketball players coming back, and we have the potential to have a great season.

“I think we have several options and we’ll continue to work on that. We’ll play a little faster and a little deeper this year than we have in the past. But that’s a good thing. We have a lot of combinations that can hurt you.”

Central in those combinations will be 6-3 senior center Madison Webb, who averaged 9.3 points and 7.0 rebounds last season. She has verbally committed to Southern Illinois-Edwardsville. She will be flanked by juniors and capable Chloe McKnight and Irye Gomez. BNL will have a deep backcourt. The Stars might have not a superstar, but they have quality at several positions.

“We played really well together over the summer, so it will be fun,” Webb said. “We’re trying to keep the sectional steak going. There will be some pressure because we’re a fairly new team.”

BNL will open the regular season on Nov. 8 at Mooresville, which is three weeks out. There’s a lot of work ahead, and a scrimmage at Heritage Christian, before that day gets here. But it will approach quickly. Time gets away.

“I liked the fact we got to practice a little early,” Allen said. “Typically it’s a short practice period before the first game. So hopefully we’ll be farther along.

“These kids expect to win. They have a lot of pride in our program. They’ve seen it, the success we’ve had and the competitive spirit we see from other teams. We want to be the team with the target, because that means we’re doing things right.”