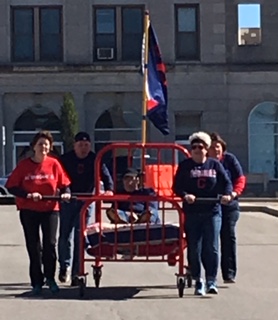 (BEDFORD) – It was beautiful Saturday afternoon for the Downtown Derby. With only one entry this year, you could say they had the whole race all to themselves.

The Theme of the Bedford Revitalization Team was “America’s Favorite Past Time.” with teammates including: Susan Gales, Marla Jones, John Jones, Allison Pipher, and Roger Gales riding the bed.

Steve Warren, Lawrence County’s race expert, and Joanna Cobb were the hosts for this year’s event. With Steve doing the pre-race interviews; he previewed what this racing team had up their sleeve. “However, they intimidated the other teams from competing,” Warren exclaimed.

Next year, BRI plans to add lawnmower races to the event, under two categories with Open stock and Modified. Pay attention throughout the year so you can be planning on next year’s Derby. By going to downtownbedford.org or Facebook ‘Harp Commons’.

This week featured several events showcasing the downtown area. Susan Gales stated that the events were well attended. The events included window decorating in which eight of the downtown businesses took part.

The “Shop Around The Square” had a total of nine businesses taking part and the winner of the Grand Gift Basket will be announced Saturday evening.

There were two nights of tours around the historic downtown Bedford with the guides telling those that attended about some of the unique architectural designs, business history and haunted buildings during the tour.

One of the major highlights during the week was the visit of Bedford Astronaught Charlie Walker, who attended the unveiling of the Dutchtown Historical Marker, and Lincoln School Marker at 19th and H Streets in Bedford.

Following the dedication, Charlie Walker and Steve Grissom, cousin to Gus Grissom, talked about the space program, Lawrence County’s claim to astronauts and they answered various questions about being up in space.

On Friday, Indiana Lt. Governor Suzanne Crouch made a stop in Bedford to unveil a historical marker at the Milwaukee Depot. Lt. Gov. Crouch noted the progress made to the downtown, and the excitement that several of the 2014 Stellar Projects is now complete.

The rain was a washout for the showing of the movie Toy Story 4 at Harp Commons on Friday night. However, it will be shown next Friday, October 18th, at 7:00 p.m. and this event is completely free for the public to attend.

The chili contest between the First United Methodist Artist Group and Bedford Farmer’s Market concluded the week’s events. The winner of the contest will be announced Saturday evening.