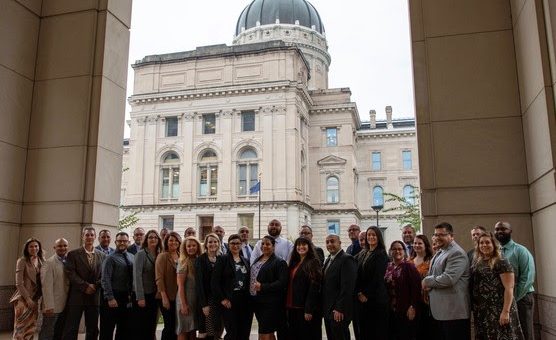 (INDIANAPOLIS.— Today the Indiana Department of Correction (IDOC) announces the graduation of 25 intelligence professionals from the Correctional Intelligence Analyst Academy hosted by the IDOC’s Investigation and Intelligence Division.

The purpose of the one-week Correctional Intelligence Analyst Academy is to provide participants and administrators expectations and clear direction of what is anticipated from them as a correctional intelligence analyst.  Additionally, they learned their purpose as an analyst and the tools and resources available to investigative staff.

“There is no question that the expectations, duties, responsibilities and abilities of a Correctional Intelligence Analyst has elevated,” stated IDOC Intelligence Coordinator B. Christian Eloiza. “This is an unbelievable opportunity to build connections and skill share with other intelligence organizations; not only in Indiana but throughout the country.”

On the last day of the one-week course, teams from the academy were required to brief Intelligence Products they had been utilizing to an audience of Decision Makers as part of the final exercise.  These Decision Makers were asked to sit in on the briefings, ask questions, and offer constructive feedback to the teams making the presentations.

Amy Roderick honored the 25 graduating participates during her keynote speech at the conclusion of the Academy. Ms. Roderick serves as a board member for the Missouri Information Analysis Center, Missouri Data Exchange, and the Criminal Records and Justice Information Advisory Committee.