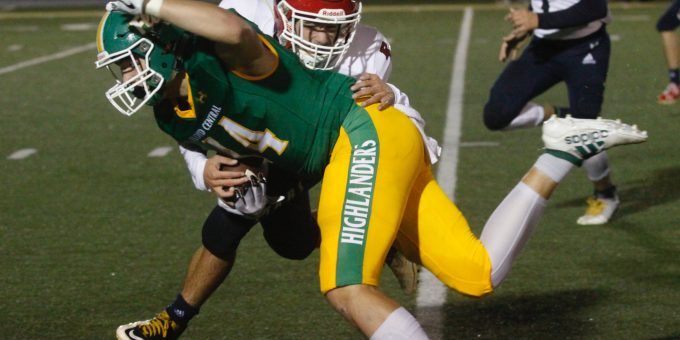 (GALENA) – Welcome to Misery, Indiana, where Bedford North Lawrence resides after another wicked-weather, wind-swept loss at Floyd Central. And when it rained, it poured on a team that came up a few slippery steps short.

Wenkers Wright, the third-leading rusher in the state, escaped twice. Just twice. But it was enough, as the Highlanders were ghosts in the mist, sliding away with a 29-21 victory on Friday night at Weigleb Stadium.

Wright bolted for 148 yards, the bulk on two 50-plus blasts, and one of those was a touchdown burst late in the third quarter to seal BNL’s fate. The Stars (2-6, 2-3 in the Hoosier Hills Conference) had five possessions to answer, but could not muster anything while facing the drizzle and the deficit.

The Stars, despite a lack of offensive consistency, owned a 21-19 lead midway through the third quarter. But a clutch 35-yard field goal by Michigan recruit Cole Hussung, and the Wright scamper, ended BNL’s bid for a road upset against one of the conference contenders and sectional favorite.

The Highlanders (6-2, 4-1) overcome several issues, mostly bad-snap headaches on special teams, to keep pace with Columbus East in the league race. East clinched a share of the title with a win over Seymour, but Floyd made sure to make the Olympians work.

Everybody was dripping afterward. That wasn’t Floyd fall-weather, but May-Weather, making it rain like that. The Highlanders enjoyed it a lot more and landed a knockout. BNL was waterlogged.

“The weather is crazy,” FC coach James Bragg said, unaware that BNL’s last five trips to Floyd have been under similar conditions. “You can’t just pack it up and go home because it’s raining. At the end of the day, our kids wanted to win. In the elements and everything, they just wanted to win.”

BNL did as well, and played like it for a long time, holding Wright in check. FC quarterback Tristan Polk was the catalyst as the Highlanders went in front, but the ball bounced BNL’s way for most of the night.

Bad snaps – blame it on the constant misting rain and a slippery football – set up most of the scores. Floyd’s first touchdown came after that field-shifting play afflicted the Stars, with Wright slashing across from a yard two plays later.

BNL answered with an electric play as Dalton Nikirk fired a 64-yard bomb to Derek Hutchens, setting up a Nikirk-to-Tabin Stillions dart from 10 yards for a 7-7 deadlock.

Floyd came back with a sharp drive, unleashing Polk. He completed five straight passes (in fact, he didn’t miss in the first half), including a 25-yarder to Kaleb Quenichet. Landon Deweese capped the march with a 6-yard flanker sweep for a 13-7 lead.

The Stars were the beneficiaries of the next punt-snap snafu, with the ball sailing over the head of Hussung. He tracked down the ball in the end zone but only got out a yard before Cade Flynn nabbed him. Nikirk scored from there on the downs turnover, and – behold – BNL had a 14-13 lead with 2:30 left in the half.

BNL struck first in the second half. Nikirk rolled out of trouble, danced away from pressure and found Bates alone in the secondary for 25 yards. Next play, Bates roared away, scoring from 39 yards for the 21-19 lead.

But that would be the last shining moment for the Stars. Hussung drilled the field goal with 5:29 left in the third, and Wright – a Haitian streak who forced a breath-holding moment on every touch – cruised home with 51 seconds remaining in the third.

“And off he goes,” BNL coach Steve Weber said. “It comes down to knowing our job and doing our job. He shouldn’t have got away. They have to learn to do what we tell them all the time. Until we do, we can’t win those games.”

Wright, if the two long breakaways are discarded, averaged only 2.5 yards per carry on the other 19 runs. Polk took up the slack, competing 13 of 15 passes (including 10-for-10 in the first half) for 121 yards.

“Everybody knows who Wenkers Wright is,” Bragg said. “They did a good job of containing him.”

Nikirk was 9 of 24 passing for 167 yards (although he only hit 2 of his last 13 when BNL was forced to the air late), while Bates finished with 71 rushing yards. BNL was limited to only 5 first downs.

“I was happy with the effort,” Weber said. “They battled. But I am super frustrated with the mistakes.”

BNL will learn its sectional fate (and a rematch with Floyd is certainly possible) on Sunday when the IHSAA conducts the tournament draw. The Stars will conclude the regular season at Jeffersonville next week. The Red Devils (3-5) beat Jennings County 54-29 on Friday night.