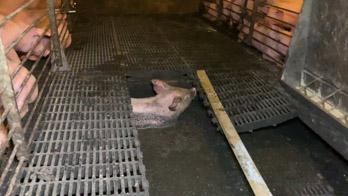 A graphic three-and-a-half-minute video was shared by PETA on Wednesday and can be seen here. Viewer discretion is advised.

The video shows pigs and piglets being thrown by farm employees, pigs swimming in pools of feces and hobbling in pain from visible injuries.

“Mother pigs are practically immobilized in crates barely bigger than their bodies, piglets’ tails are crudely chopped off, and trampled piglets are left in agony to twitch on the floor,” Tracy Reiman, PETA Executive Vice President, said.

The farm is a supplier to Louisville slaughterhouse JBS USA, the maker of Swift brand pork products and the leading processor of meats in the U.S. and Canada. About 10,000 pigs are killed every day at the JBS Slaughterhouse in Louisville. PETA has also urged JBS USA, the food company that operates a pork processing plant in Louisville, to no longer accept and slaughter pigs provided to them by East Fork Farms

PETA has requested Indiana State Police to investigate and has alerted the Indiana Occupational Safety and Health Administration to worker safety concerns.  PETA is also asking that criminal charges be filed.

ISP Sgt. Stephen Wheeles has confirmed they have received a complaint alleging abuse.