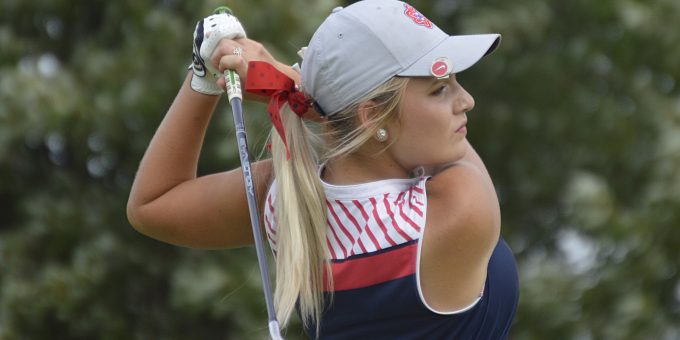 (CARMEL) – Bedford North Lawrence junior Addyson Bailey capped her season with a second-day 85 during the final round of the IHSAA state finals at Prairie View Golf Club on Saturday afternoon.

Bailey, making her third straight appearance in the state championship, carded her best-ever score on the course and finished 36 holes at 172, tied for 47th in the field.

Bailey got off to a solid start in the final round. Going off the back nine first, she birdied the 18th (her only birdie of the tournament) and made the turn at 3-over. But she struggled on the front nine.

“It was very rough, but I made it through it,” Bailey said. “I couldn’t get a putt to drop, couldn’t hit greens. It’s a pretty long course and you have to be on your game the whole time.

“I was very frustrated. It was like ‘Please make it, I need this.’ But I kept my composure.”

Bailey made only one par on the front and posted two double-bogeys.

“She got off to a really good start, had a clean scorecard,” BNL coach Aaron Sanders said. “Then she got loose with the irons, and she never got back in a good rhythm on the front. She didn’t have many birdie opportunities and missed some short par putts.”

Bailey used the two-day event as a learning experience, citing the chance “to meet girls I had never played with before,” she said. “That was the best part.

“It was definitely different. I wish we could have had everyone (on the BNL team, which didn’t advance out of the regional) here, but it was just awesome to be able to go.”

“I loved the way she handled herself,” Sanders said. “She represented us and the school, showed her maturity out there. She learned a lot about herself and her swing. This will make her a much better player.”

At the top of the team leaderboard, Homestead upset top-ranked and defending state champion Evansville North to win its first state crown. Homestead shot a two-day score of 605 to top the Huskies by 12 shots.

Evansville North’s Faith Johnson was the individual medalist with a 36-hole score of 73-69-142.