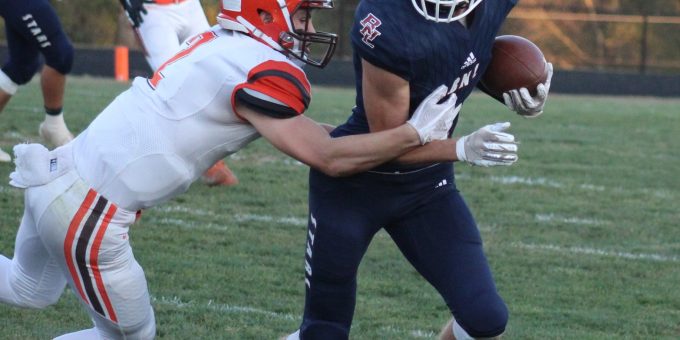 Gilley completed all of his passes, five for touchdowns, and East’s massive offensive machine scored on every possession (until the third string assembled in the victory formation only 10 yards shy of another touchdown) while thundering past the outmuscled Stars 62-21 on Friday night.

Football logic: Nobody can defeat what can’t be stopped. And East (5-2, 4-0 as the march toward another Hoosier Hills Conference title continues unabated) was never hindered. The Olympians totaled 508 yards (on only 39 snaps), and that was with a running clock in the second half.

East running back Mark McDonald had 146 rushing yards (on only 6 carries) and even ran over the umpire during a 40-yard touchdown crash up the middle. So even with 12 defenders, BNL couldn’t contain him.

The Stars (2-5, 2-2 in the HHC) managed some offensive counters, with Dalton Nikirk throwing three touchdown passes and receiver Derek Hutchens enjoying a memorable Senior Night with two spectacular grabs. But from a 20-14 contest with 9:12 left in the first half, the Olympians shrugged like Atlas and pounded the Stars into the worn grass.

“You have to play that team full strength and a perfect game,” BNL coach Steve Weber said. “Once you punt, you’re done. We can’t stop them. How many times did they have third down?”

That answer Coach: Once, until the third string took over on the final drive.

Here’s another stunning stat. East’s time of possession in the first half – 7 times with the football – was a total of 5:21. The Olympians were fast, furious and fierce.

BNL stayed close early because some deflections went its way. BNL’s first drive ended with a punt that bounced off an East helmet into Hutchens’ hands. He dashed into the end zone, but rules state the ball cannot be advanced. He would get a second chance later.

East scored the first two times as Gilley hit Collin Phillips for 30 yards and Lance Greiwe dashed 19 yards following a long punt return. Then lightning struck as Nikirk fired a 67-yard bomb to Hutchens for a 14-7 game with 2:30 left in the first quarter.

The Olympians scored again in only two plays (a common theme) as Gilley spotted Greiwe alone out of the backfield for a 56-yard strike.

BNL, to its credit, came back with its best drive, 65 yards in 12 plays, with Skyler Bates announcing his return from injury with two bullish runs (the last for 20 yards). Hutchens scored again when Nikirk lofted a pass into the back of the end zone, intended for Ethan Baer but falling in Hutchens hands when Baer leaped and tipped the ball back away from a defender.

“The officials asked me if I drew that up,” Weber joked.

But from that point, East was no joke, scoring at will. McDonald blasted 40 yards and left the umpire on the ground, ripped off a high-stepping 65-yarder with Greiwe finishing from 4 yards, and Gilley capped the half with TD passes to Dalton Back (11 yards) and Malachi Parks (26 yards) for a 49-14 halftime lead.

Start the running clock. BNL had to finish with the new “mercy rule” for the third time this season, although it didn’t stop East from adding two more scores. BNL’s final touchdown was a 28-yard pass from Nikirk to Bates early in the final quarter.

Nikirk was 9-of-19 for 149 yards but was also intercepted three times as BNL was guilty of four turnovers. Bates had 67 yards rushing.

“Their offense is always tough for us to stop and they stayed with us early,” Gaddis said. “Our offense just kept answering and that’s what it was going to take.”

“We were able to move the ball, not able to be consistent,” Weber said. “We still make mistakes and penalties, still blow things we should know. But we can move the ball against a dog gone good team. Now if we can just find an answer defensively.”

East has now won 99 straight games against HHC opponents when postseason games are added into the equation.

The Stars will test Floyd Central next week. The Highlanders handled Jennings County 55-24 on Friday night.