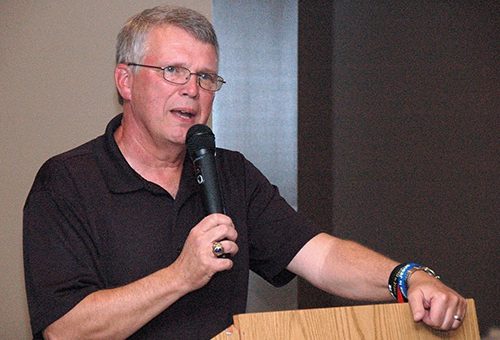 “Damon was a tireless public servant who was passionate about his city and the state of Indiana. As a veteran, small businessman and city leader, he nurtured relationships of all types to improve the lives of all of those around him. Janet and I are heartbroken for his family, friends and the Madison community. We ask that all Hoosiers join us in offering prayers and condolences to the Welch family.”

Madison Mayor Damon Welch died this morning after what is believed to have been a heart attack.

The City of Madison is preparing an official statement and as soon as it is release we will post.

City of Madison Statement on Death of Mayor Welch

With great sorrow, the City of Madison joins all its citizens in mourning the passing of Mayor Damon Welch. Mayor Welch awoke with health complications early this morning. He was rushed to Kings Daughters Hospital where he subsequently passed.

Shortly after 9 a.m., city employees were directed to lower the flags at City Hall and other city properties, in memory of the mayor.

All city employees and office holders offer their heartfelt compassion to his wife Ginny, his children and grandchildren.

City functions such as trash pickup will continue today. Any changes will be noted on the city website, www.madison-in.gov.